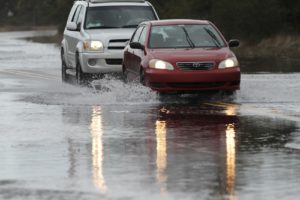 There is currently above-average snowpack in the region, and when that snow finally sees some consistent warm days, Water Management Section civil engineer Logan Osgood-Zimmerman said the residents of North Idaho can look forward to flooding conditions like those they saw in 2011.

She said the difference this year is that while in 2011 the snowpack was widespread, this year it’s largely contained in the Upper Pend Oreille Basin. This means the snow will likely take longer to melt and reach the lake, putting peak runoff in June rather than the normal time of late May.

“We’re just keeping the lake as low as possible,” Osgood-Zimmerman said. While Albeni Falls Dam is typically at free flow this time of year, this year is different thanks to the immense high-elevation snowpack.

U.S. Army Corps spokesperson Scott Lawrence emphasized that the dam only manages 1 million acre feet (MAF) of the lake — roughly the top 11.5 feet of water. So when it comes to avoiding flood levels, the dam can only make a difference within a small margin. Unfortunately, Lawrence said, this year’s margin between no flooding and flooding is not so small.

Lake Pend Oreille’s average inflow from April to July is 12 MAF. This year, the Corps predicts the lake will take on 16-19 MAF in that same time frame.

“We (will) have to go on free flow to pass whatever we can pass,” Lawrence said. “It’s challenging.”

Official lake measurements are taken at the Hope gauge because the area is affected very little by the weather or surrounding rivers, said Water Management Section Chief Kevin Shaffer. Max pool at the Hope gauge is 2,062.5 feet.

According to the Northwest River Forecast Center, the lake is 60-percent likely to exceed flood levels at the Hope gauge (over 2,063.5 feet), and 25-percent likely to exceed the flooding that happened in 2011 (2,064.29 feet). Shaffer said that because those probabilities are based on the Hope gauge, residents downstream should be prepared for even higher chances of flooding due to high-water flow.

Osgood-Zimmerman said flooding could likely begin in late May, but the lake will not reach its peak until early June. However, she said, this all depends on the weather between now and then.

Those looking to purchase flood insurance through FEMA should do so as soon as possible, as the insurance doesn’t go into effect until 30 days post-purchase.

The high snowpack won’t only lead to more runoff, but also saturated soils and increased erosion. Lawrence said this summer will likely be bad for driftwood in Lake Pend Oreille. If you encounter large debris while boating, report it to the Bonner County Sheriff’s Office dispatch line at (208) 265-5525.

The Corps also shared news that the Clark Fork River Delta boom system is missing a few booms, so they’ve partnered with a contractor who will make repairs as soon as the Clark Fork River’s flow is down and the lake reaches an appropriate level for maintenance to be done.

Lawrence said a date for the repair’s completion is “really hard to nail down,” but he predicts late summer.

The Corps is holding an informational meeting about the flood predictions tonight — Thursday, April 19 — at the Kalispel Camas Center in Cusick, Wash. at 6 p.m.