Lately I’ve had several requests for my sweet bread pudding recipe. The truth is, this recipe, like many of my others, is predicated on what’s in my freezer. And my Christmas gift to you good folks is to share some of my secrets of repurposing food. Leftovers, extras, scraps—whatever your chosen vernacular—the food that remains after the last guest has departed can take on a whole new delicious life.

I’ve never been able to toss a scrap without guilt. Back on the ranch, I had a lot of hungry mouths to feed and even prepared extra for “drop-ins.”  I used to keep plastic storage containers in the freezer: one for vegetables, one for meats, and so on. When the tubs were nearly full, I’d turn them into savory stews, soups or shepherd pies. About then, I also acquired my first Cuisinart and I learned, to my delight, I could not only repurpose, but also camouflage foods. One Sunday morning I served the cowboys a baked sausage and spinach pate, and they were having none of that. A couple days later they thought it was mighty tasty, concealed as ground meat in a Bolognese sauce over pasta. One of the older, gruff cowhands once confided in me, “we never knew what the hell we were eating after you got that food chopper.”

From the ranch to the restaurant, I’ve fed hundreds if not thousands of family, friends and clients. Invariably, I am often asked for recipes, but who wants to take the conversation from glowing compliments to, “First you start with a bucketful of frozen leftovers…” But food is expensive, and if properly preserved, there’s very little that can’t be repurposed.This party-centric season is a great time to be mindful of all the food we needn’t waste.

My chest freezer is a treasure trove of ingredients, carefully wrapped and labeled for their next life. For instance, after Thanksgiving I wrapped and froze a leftover pumpkin roll, dinner rolls, and half a pecan pie plus some left over whipped cream. All this, plus some extra cream and four eggs became the bread pudding that friends were raving about!

Recently after a party, I froze the leftover hot spinach and red pepper cheese dip and added it a few days later, along with some frozen Cioppino to a cream reduction and served it over linguine.

This time of year I also deconstruct antipasto and relish trays, anything that could typically go into soup stock is chopped, sautéed and frozen.Most fresh vegetables preserve better with a quick blanch or sauté before freezing. If baking, I save the bits of nuts and coconut or whatever else I chopped a little too much of and store that in a freezer container too.When it’s nearly full, I add it to a batch of scones or a streusel coffee cake.

Some foods, like cheese and cream will form crystals when frozen and lose some integrity when thawed so they work best in a recipe that requires heating or cooking. When saving yolks or whites of eggs, whisk them with a little sugar before you freeze.

The success in repurposing lies not only in the packaging, but also the labeling. I do have my moments, thinking to myself, “what the hell is this?” I cook a lot of meals and freeze for my daughter and her family, and they too have met up with some frozen “mystery packages.” So if you’re really in doubt, just toss it out.

I must confess to finding some really interesting stuff in the freezer, and about twice a year I don my arctic gloves and assess the larder. I used to collect hail balls, and, in hindsight, I am not sure why, because I have never actually gotten around to displaying them for bragging rights. I also love buying things on sale, and apparently bacon tops that list as I recently discovered a cache of ten pounds (you can’t have too much bacon).

After you try this recipe for Ancho Chili caramelized bacon, I feel like I might find you hanging around the bacon sales too.

Left over cinnamon rolls work well in the sweet bread pudding recipe and so too does a big drizzle of caramel ice cream sauce.

Merry Christmas from the Eater—and the freezer! 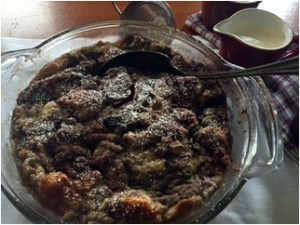 •About eight cups bread or rolls, cut into 1-inch cubes (can be part cinnamon rolls, left over cake, etc)

•Butter a round casserole glass baking dish. Set aside

•Add milk, sugar, cream, and vanilla; whisk to blend well. Stir in bread and raisins/substitute. Pour mixture into prepared baking dish. Press down lightly to make sure all the bread is soaked.

•Place pudding in a roasting pan that is a little less than half filled with hot water.

•Cover the roaster with foil and bake/steam the pudding for 2 hours.

•Dust with powder sugar and serve warm with hard sauce.

•Add cinnamon and the liquor, a few drops at a time, beat until smooth. 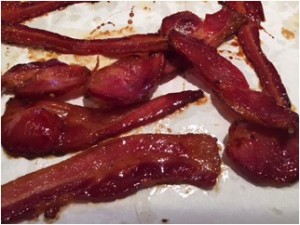 Should serve 4-6 (or one bacon addict) as a cocktail snack. Also great served atop salad. Good luck having any left when you serve the salad.

•Arrange 1 pound thick cut, meaty bacon strips on the foil and coat both sides with the chili sugar.

•Bake for 10 minutes, until sizzling and lightly browned.

•Spoon off the excess bacon fat from the baking sheets and bake an additional 5 minutes to 7 minutes longer, until crisp.

•Transfer to a rack set over a sheet of foil to cool; cut in 1 inch pieces and serve.