I used to hide in libraries when I was little. 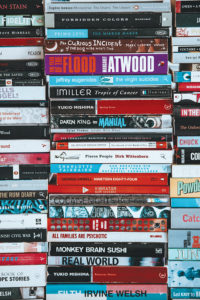 The school, the church and community libraries all had their particular bibliotheca. They were special places where I could find quiet and read and learn about the world outside in a place of comfort. A peaceful place where millions of characters hid in there with me. I read of the lives of famous people, history of places, and things that one could make, see or do – nonfiction.

I also discovered fiction. I found amazing characters. I could see their homes, their binders arrayed on steel shelves, their colorful places large and small, thick and thin, and of course, private places tucked behind locked glass doors where special, ancient, and the privileged lived. Walk into a library and your imagination begins.

You meet interesting people there. You become entwined in their sorrow, happiness, folly and share their uplifting spirit then watch them fail and be dashed to near death, sigh, and become redeemed again and again. I am speaking of books of course, not library patrons.

Books live incredible lives. They embrace all the eternal mysterious wonder of words.

Creatively, words employ the most strictest fidelity to truth or lie so believably we have no cause to doubt, and then there is simple entertainment. Open a book at random and peruse the very first sentence of a novel, a mystery, a thriller, western, or sci-fi and you might find something like:

“You do an awful good impression of yourself.” Brett Easton Ellis, “Lunar Park.”

“The church had become a tomb where forty-seven bodies turned to leather and stains had been lying on the concrete floor the past five years, though not lying where they had been shot with kalashnikovs or hacked to death with machetes.” Elmore Leonard, “Pagan Babies.”

And then there is this true story:

“Some of the evil of my tale may have been inherent in our circumstances.” T. E. Lawrence, “Seven Pillars of Wisdom.”

Our library is not new, but is renewed. I think of Andrew Carnegie who turned his fortunes into great libraries. Where are the benevolent oligarchs of today? Why are they not turning their fortunes into something other than split stocks?

One great tyrant, warrior, statesman and conquerer stole, borrowed and bought the greatest books one could find on earth and constructed a library for his own city. Considered to be the greatest and very first library in the world, built by Alexander the Great, was the Ancient Library of Alexandria. It was dedicated to the Muses, the nine goddesses of the arts. The library was part of a larger research institution called the Museaum of Alexandria where many of the most famous thinkers of the ancient world studied. Look it up. I did and learned; because of the Great Library, Alexandria was considered the capital of knowledge and learning for its time — beginning in the 3rd century BC.

Now, I like to believe it is also true here in Sandpoint where our community can consider itself the capital of knowledge and learning for its time, 2018, in the county of Bonner. It was great before and now, it’s a monument to reading. Look at it. The walls have moved, the books disappeared and reappeared, so that after months of construction, the place is more vibrant than ever. Any frustrations (and there were few) were made most amusing by the humorous comments posted on the doors —to calm us nerds and fake us out. I wish I had copied them down. Something about “dust and mayhem” though they said it best.

I still hide in the East Bonner County Library. It is a place that has forever helped to inspire me. You might find me at a table, on a chair, staring amiably into space, a dull guy with dark circles under his eyes, eyeglasses seemingly glued, muttering about something I read, or drifting down the aisles tilting my head up and down looking for titles I’ve never heard of. I’m a readerly rogue and book obsessed. My obsession with words and books came early in my life.

My predilection for word salads came from my father, who required I be fed at the dinner table only after I had acquired a word from the dictionary to spell, pronounce and use in a sentence.

I rarely misspelled anything because the sounds my stomach made helped me remember. It would say things like: P-e-u-n-i-t-v-e, but there never were punishments, only accolades. Both parents were readers. They gave to me everything from Kipling to Kerouac and some very heady books in between. Dad was often buried in Graham Greene. And, Ma was silly for De Lillo.

But, this story is not about me. This story is about my thanking the new Library and their scheming, conniving way in which they got me to read nonfiction once again. My interest had always been fiction: a tale told well, a writer’s vibrant imagination, the things written that would suspend my belief, to rise and fall with anticipation of a plot done well (I have been trying to read Pynchon’s “Gravity’s Rainbow” for three years) —reality is something for news mags and papers).

But those people at the EBC Library, well, they are pretty clever. I think it was a conspiracy. They must have watched carefully all the fiction — the sappy novels, the sci-fi, a few “dewey” romances or maybe all the Jim Harrisons I devoured — that evidenced I was a patron of limited scope, and they would have nothing of that. I was to become a well-rounded a reader for nonfiction once again. And they were right.

I think this is how they pulled it off. It was when I arrived one day to search for the latest work from Kurt Vonnegut and found the “Fiction” category had been moved — and they couldn’t tell me where (or cleverly refused to) because they had undertaken this wonderful new building program and said they had no clue.

So, I hung my head and wandered into the sections on science, art, history and lifted my head to all the wonderful books I had been ignoring. I find myself now cozying up to world history, science and biographical adventures too numerous to list.

I want to thank the EBCL for that. You guys are great, your house is beautiful and I believe you have conspired very well to balance your readers into realms of words and books they may have missed. I used to hide in libraries to read and escape the real world. The real world is in there too, escape unnecessary, cherish the words that will save us.

Thank you for a job done well.