It’s America’s favorite friendship-ruining board game. Most of us associate this with a fun family night, or a table-flipping rampage, but what you might not realize is that it has some pretty deep roots in economic and political theory. I was shocked when I started reading about just how much research has gone into, and come out of Monopoly, and now I intend to share that shock with you. 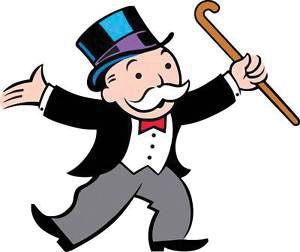 The roots of Monopoly start with a game from 1903 called The Landlord’s Game, which used Georgist principles to showcase an economic principle without making the public’s head spin. What in the heck does that even mean?

Well, think about the entire point of Monopoly. It starts off easy, where everyone has a fair shot, but the goal is to choke everyone else out into bankruptcy and dominate the board. That’s the antithesis of Georgism in a nutshell.

If I was interpreting it correctly, Georgist thought is that land should belong to society, and that taxation should be based off the value generated from the land, be it profit from oil, rent, agriculture, you name it, rather than arbitrary values that exist to enrich a sole owner, such as a landlord or a corporation.

Basically, if you have five tenants, with four of them making $1,200 a month and one making $750 a month, it doesn’t make sense to charge everyone $900 a month starting off, then adding $32 every month on top of that.

It doesn’t make sense, but it happens anyway. When trying to compare this thought process to modern economics, it doesn’t make a whole lot of sense because it’s been a bit lost with the times. Theoretical socialism is the closest thing, along with the ideas of “flat-tax” where everyone pays a fixed percentage to society (rather, government.)

To be clear, I’m not advocating for political or economic agendas. I’m just presenting what I discovered while researching Monopoly!

The inception of Monopoly was rife with drama and deceit. The original creator, Elizabeth Magie, patented the game in 1904. Sometime around 1930, a man named Charles Darrow asked for a set of written rules for the game, then plagiarized the whole thing, changed the name to Monopoly and sold it for a buttload of money to the Parker brothers, who went on to turn the game into a worldwide phenomenon.

The premise of the game is pretty brilliant when you think about it. It teaches us the worst about ourselves by making us utilize the worst in ourselves to win.

This applies to real-world business too, and we watch it happen around us on a daily basis. It’s kind of the nature of economics, really.

One of my favorite descriptors of what an economy is came from Tim Urban on his online blog, Wait But Why: Think of the economy like a jungle. Huge trees that have lived for generations grow big and tall to block out the forest floor and choke out any competition. Eventually, a new sprig that’s adapted to living in this harsh environment will pop up and grow until it’s an even bigger tree that’s choking out the ones before it.

In this analogy, the trees are companies. If that seems silly, think about the chokehold Amazon has put on brick and mortar businesses. It cropped up and adapted to create a new kind of shopping experience where other stores just couldn’t compete. If you don’t believe me, I challenge you to find your latest Toys-R-Us or Circuit City receipt.

It’s hard to separate the game from reality, which is the point of the game, but let’s get back to the board. The layout isn’t random. Statistically, your odds of landing on certain properties are higher for a number of reasons: Their placement on the board and the fact that you use two dice to move, as well as the fact that you get punished and sent to a certain part of the board if you roll poorly

Monopoly games last a notoriously long time. This has been a lauded problem since before its official release. What doesn’t help is the fact that the bank can never run out of money, so if it does, it’s allowed to mint more. In real life, when this starts happening, it generally leads to hyperinflation, which means the price of things goes up while the value of money goes down exponentially. A notorious example of this happening was after Germany lost World War I, they were hit with crushing reparation payments to the countries that won the war, while simultaneously trying to rebuild their own country. Within months, people were burning stacks of money because it was cheaper to burn several thousand dollars than spend tens of thousands to buy a lesser amount of wood.

Hyperinflation is a can of worms all its own, and I’m running out of words! For the time being, enjoy the random corner and have a good week!