Ross Davis has a vision for Hope’s historic Wellington Place storefront, and he’s excited to jump in

For Ross Davis, it was an arduous road to Hope, Idaho. 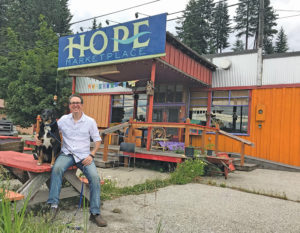 Ross Davis and his rescue dog, Otis, sit outside the Hope Marketplace, which will soon be Davis Grocery and Mercantile. Photo by Lyndsie Kiebert.

He, his wife and his three young children moved here two years ago to be closer to his wife’s parents. She was deathly ill and bedridden at the time, and Davis’ boat-maker’s salary in Seattle wasn’t cutting it.

The first time Davis went with his wife to see the home they purchased in Hope, he noticed the Hope Marketplace on the hillside by the Post Office and expressed his joy that the small town had a grocery store. His wife, Jamie, told him the marketplace didn’t sell groceries.

“Right then I knew — that’s my grocery store,” he said.

But first, he worked at Monarch School — the Heron, Mont., therapeutic boarding school that suddenly closed in September. There, Davis taught music and provided addiction counseling. During that time, Davis said Jamie nearly died three times. Thanks to support from Monarch School staff, Cedar Hills Church in Sandpoint and a few others, he said they made it through that awful time.

Hope Marketplace owner Kally Thurman met Davis at the Monarch School and, upon hearing about his grocery store dream, decided it was time for a change.

“He is just on fire with ideas,” Thurman said. “I’m excited for him. It feels like this is what we should be doing.”

Thurman said she recognizes a hands-on work ethic in Davis, and it’s something she respects. She sees the transition from the Hope Marketplace to Davis Grocery as a “when one door closes, another opens” situation.

“My goal was to put art in the walk of everyday life, and I think we’ve done that,” she said. “This has been a good 18-year gig.”

Now Davis is making his own goals for the historic storefront, all while keeping the community spirit of the building in mind. His 15 years of work in grocery stores — and in every department imaginable — will only help.

“I can’t wait to meet everybody,” he said. “I want this place to have a neighborhood vibe, and be the spot where everybody runs into each other.”

Davis plans to not only serve as a classic grocery store, but also as a cafe and museum. He said his wife is currently working with the Bonner County Museum to create a collection of photos and artifacts illustrating the history of Hope. Thurman’s art classes and Friday wine tastings will continue at the store for some time.

Davis said the store’s focus will be healthy, but affordable, food. He said his prices are likely to compare to Yoke’s. He’ll carry a wide array of typical groceries and produce, and even offer a bulk section for things like grains and coffee.

While he understands people in the Hope area are still likely to go to Sandpoint for their larger shopping trips, he isn’t necessarily catering to that crowd.

“I’m catering to the hand basket crowd — you know, the people who are shopping for tonight’s meal, and maybe for tomorrow morning,” he said.

He said he wants to incorporate local goods, and maybe, in the future, to host a small farmers’ market on the street outside.

If anything, Davis’ intuition was right — it’s his grocery store now, and he’s glad it’s in such a small community.

“Here, people really mean it when they offer to help,” he said. “In Seattle, I didn’t know my neighbors. Here, I know everyone on my street.”

As Davis prepares to make this serendipitous dream a reality, he said he’s grateful for the opportunity to be a resource for the community who gave so much to his family.

“We’re really happy to be through the tunnel and out the other side,” he said. “Now we want to give back.”

Contact Davis about selling your local goods in the store at [email protected], and learn more at www.davisgroceryinhope.com.