A lunch under $15 is becoming rarer and rarer these days, which is why Thai Nigiri’s sushi lunch special is one of our go-to meals in Sandpoint. Offering sushi and Thai food, along with a smattering of other entrees, Thai Nigiri has become a staple on First Avenue.

It might surprise some to know that sushi didn’t originate in Japan, but rather in Southeast Asia and China. The practice of making sushi is estimated to have started as early as 500 B.C.E. in the rice growing regions somewhere along the Mekong River. The technique of fermenting fish in rice then made its way to Japan via China sometime around the eighth century C.E.

There are actually six types of sushi: narezushi, nigirizushi, makizushi, chirashizushi and oshizushi. Narezushi is the oldest type, involving fermented fish and rice, in which the rice is discarded before eating. Nigirizushi, or hand-pressed sushi, is one of the most popular in modern times. It consists of an oblong mound of sushi rice, hand-pressed, with a topping placed over it (such as sashimi). Maikizushi is also common, consisting of a cylindrical roll of meat, veggies and rice wrapped in thin nori. Conversely, uramaki is served with the rice on the outside.

Less common is chirashizushi, or “scattered” sushi, which is served in a bowl with vinegared rice topped with raw fish slices and garnishes. Oshizushi is pressed sushi, made by layering toppings into a wooden mold and covering them with sushi rice, then pressing the lid to create compact blocks. Finally, inarizushi is named after the Shinto god Inari. It’s made of a pouch of deep-fried tofu filled with sushi rice.

As its name suggests, Thai Nigiri mostly serves nigirizushi, cut into bite-size pieces with wasabi and pickled ginger on the side. One can choose from 10 rolls to take advantage of the lunch special, which offers any two rolls with a potsticker for $12.95. Each roll comes with six pieces, and additions are possible with a small additional charge.

Reader Editor-in-Chief Zach Hagadone and I ordered a selection of rolls to sample the different flavors on offer. Here are some of our notes from the rolls we ordered:

This is the “entry level” roll for many who haven’t discovered their love of sushi. Rolled with the rice outside, this form is largely responsible for spreading sushi throughout the Western world. At Thai Nigiri, the California roll is light and refreshing, with the mild tastes of crab, cucumbers and avocado pairing nicely around a simple nori and rice wrap. The fishiness is very light, but enough to remind you that you’re eating fish. 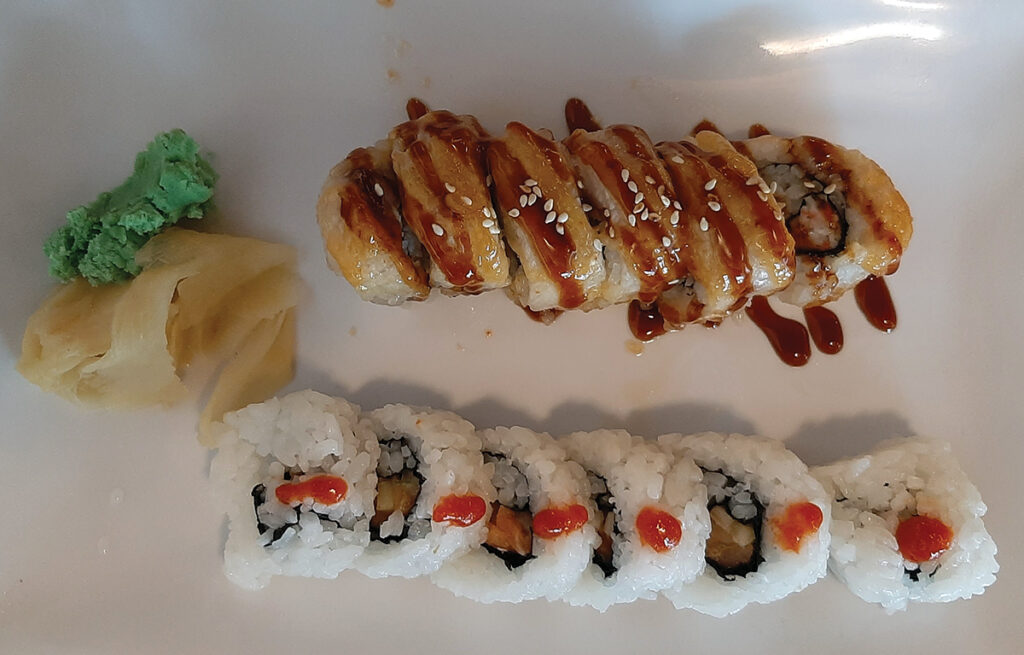 Very similar to the California roll, and one of the most ordered sushi rolls in history, the spicy tuna roll contains tuna and cucumbers, with just a touch of spice. I hate to use the word “basic” when describing this roll, because it is quite delicious, but there’s very little complexity. The tuna flavor is subdued and easy, and there really isn’t much spice to speak of.

For those who enjoy a breaded crunch around their shrimp, this one is delightful. Rolled with rice on the outside, the tempura breaded shrimp is joined with crab, cucumbers, yum yum and eel sauce. This is the most “comfort food” type of sushi I can imagine, with the tempura crunch providing a salty, hot counterpoint to the cold rice and other ingredients.

Now we enter the territory of deep-fried sushi rolls, which has taken off in recent years in the West. Containing crab, yum yum and eel sauce, the entire roll is lightly breaded and deep fried to provide a wonderful crunch with every bite. The eel sauce gives it a sweet and salty flavor, which is complimented by the creaminess of the yum yum sauce. Deep fried rolls also come hot, which is a nice change from other rolls, which arrive at cooler temperatures. There is very little fish smell or flavor in the tempura California, making it a great one for the kiddos.

Another deep-fried roll, the spicy tuna tempura is the spicy tuna roll with yum yum and eel sauce, lightly breaded and deep-fried. The flavor combinations are great with this one, but again, I’d hesitate to call it “spicy.” I would like to see a bit more crunch on the breading, without overpowering the internal flavors. 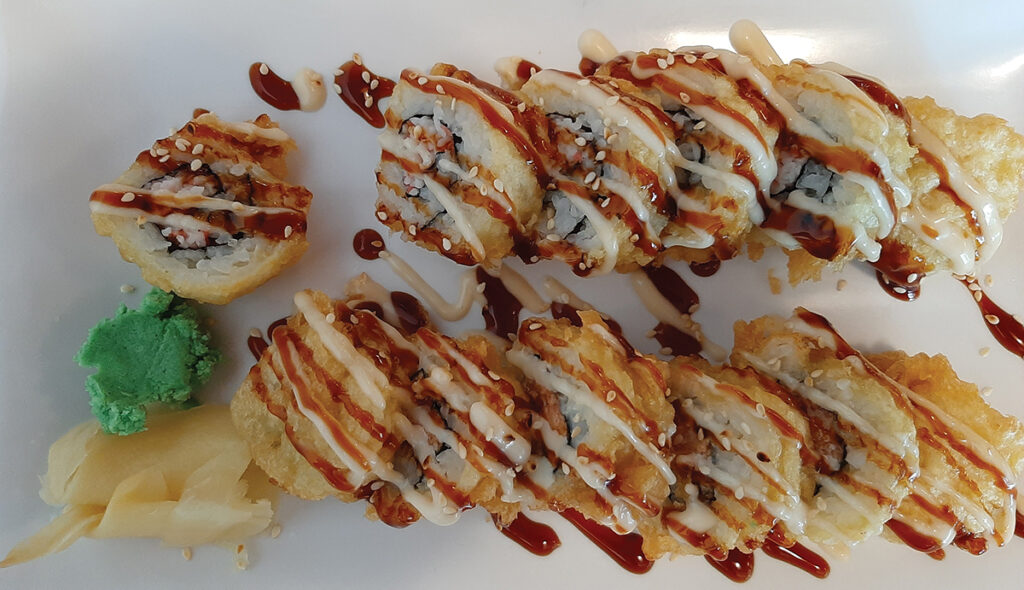 Hagadone’s tasting notes are as follows: “Creamy texture from the yellowtail topping and just slightly warm. Pleasant spiciness that unfolds from within, rather than hits or kicks from the start. Just a hint of sweetness. Like comfort sushi. One of the most umami of the rolls I’ve had. Tempura can sometimes taste like fishy pastry with too much dough, this is much more subtle and does actually feel baked, rather than breaded.”

More of Hagadone’s tasting notes: “Bright and clean-tasting. The dollop of sriracha on top is a direct, immediate spike of spice right on the tongue. Kind of overwhelms the rest of the roll, which doesn’t have much going on inside to contend with the sriracha. Actually, I kind of preferred it when I scraped off some of the hot sauce.”

Whether taking advantage of the lunch special, ordering one of the dozens of other sushi choices or tapping into its Thai offerings, Thai Nigiri is also a great choice for a simple take-out dinner or sit-down date night.