City to kick off ‘design competition’ for downtown waterfront

Members of the Sandpoint City Council heard a presentation at their regular meeting Sept. 21 on a unique way of determining the design of redevelopment projects at the downtown waterfront and potentially beyond — a competition.

“The way we would usually address this, and the way that cities usually address this, is to issue an RFQ [request for quote] for design services and select a qualified responder with the capabilities to provide the service,” said Sandpoint City Administrator Jennifer Stapleton, describing the competition model as, “another, more holistic, approach that provides for broader community participation, greater design team interest, addressing the community’s concern for influencing private development in the area and ensuring a design that uniquely fits the goals, history and character of Sandpoint.”

To guide the process, the city has contracted with internationally known Portland-based architect and master planner Don Stastny, who has managed design competitions around the country. 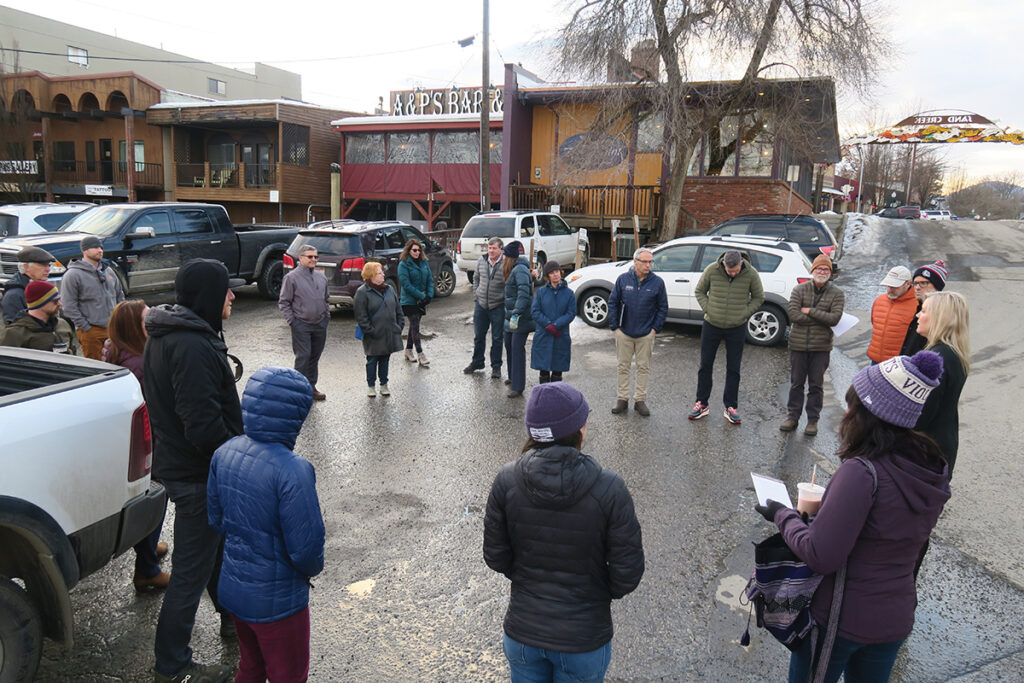 City of Sandpoint staff and elected officials meet with the public in Feb., 2022 to discuss changes coming to Sand Creek along First Avenue. Photo by Zach Hagadone.

“What the design competition does for you is it gives you different ideas to look at,” he told the council via Zoom at the Sept. 21 meeting. “Instead of one single designer putting forth a plan that you then modify, you might have three or four plans to look at … and choose the best things out of the plans.”

According to Stastny, the cost for running a competition is typically similar to paying a single designer to provide a conceptual design but — in addition to generating more ideas — also gets more stakeholders involved.

Already, an advisory panel of 15 members has been assembled to kick off the process, including individuals representing the city; downtown businesses and property owners; citizens; liaisons from the Planning and Zoning Commission, former Historic Design Standards Workgroup and Arts, Culture and Historic Preservation Commission; Kalispel Tribe; and other community leaders.

That advisory group will develop the competition, identifying the preferred credentials of contestants with an eye toward building design teams, then establishing the program itself — telling designers of the broad expectations for their submissions.

That could mean everything from building heights and setbacks to size, theme and all the “spaces in between,” meaning the overall context of the project area.

“We want to set a very high bar as to what you as a city want,” Stastny said.

Finally, the group will build the “jury” and selection process, consisting of a mix of specialists and members of the public who will collaborate on determining which designs to forward.

An overall budget, including honorariums for competitors and/or jurors, as well as a schedule of the competition will be presented to the council in January 2023, with the competition expected to be concluded sometime in the summer of 2023.

In the meantime, the first of three workshops on the competition is scheduled for Tuesday, Sept. 27, covering the purpose of the competition, an overview of the process and preliminary definition of the study area. Further workshops over the next month will hone and refine those topics.

Stapleton said that beyond selecting design concepts, the competition is also intended to find ways for how “we might be able to effectively influence downtown.” That could include code changes, design standards and best practices applied even to private development in the area with an eye toward “ensur[ing] it fits the character and history of the community effectively interfac[ing] with the publicly owned waterfront,” according to the Sept. 21 agenda materials.

“We’ve heard the concerns from the community,” Stapleton said.

Though the downtown waterfront project has been on city agendas since at least early 2020 — and included in the 2020 Parks and Recreation Master Plan — it drew widespread public interest, and no small amount of ire, in July when developer One Bridge Street LLC unveiled plans for a 65-foot-tall mixed-used development including 13 luxury condos at the corner of First Avenue and Bridge Street.

Councilor Andy Groat, in an apparent nod to the furor over the One Bridge Street development, said “our town is very unique, our people are very unique, this is a very unique problem to find some answers for.” Meanwhile, he added, there are some “citizens who are incredibly grumpy about change.”

This process, Groat said, has the potential to get around conflicts and bring in the wider community.

“This is an open invitation right now for our community and our citizens to come in and speak what it is that they want the next 10, 15, 20 years of waterfront to look like,” he said.