Love songs that save the day

Valentine’s Day is just around the corner, and with it come the usual dilemmas. Whether the holiday means scrambling for last-minute gifts and reservations, painstakingly planning the perfect evening or cursing the heightened awareness of single status, it’s a day with its own unique headaches. 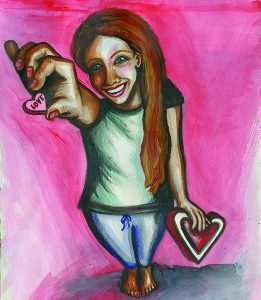 At the very least, music doesn’t need to be counted among the stresses. Love songs are just about as old as music itself, and over the years, songwriters have penned some stirring poetry about the elation and complexities of romance.

If you’re looking for a few additions to your Valentine’s Day soundtrack, you could do worse than these classics and newer gems that have earned my affection.

“In Spite of Ourselves” by John Prine and Iris DeMent

John Prine and Iris DeMent’s ode to loving your partner, imperfections and all, deserves a place among country music’s great duets. Both sweet and funny, the song finds a man and woman trading observations of the other’s strange habits and qualities. The woman might “swear like a sailor when she shaves her legs,” and the man might “drink his beer like it’s oxygen,” but they know that “in spite of ourselves, we’ll end up sitting on a rainbow.”

Elliott Smith is best known for his songs grappling with melancholy and pain. But the legendary singer-songwriter was just as adept at capturing the joys and happiness of life. There’s no better example of that than “Say Yes,” a quietly hopeful song about finding renewed optimism through the prism of a new relationship. Smith sings that he’s “in love with the world through the eyes of a girl who’s still around the morning after,” and it’s just enough to get him through the day.

“God Only Knows” by The Beach Boys

A song beloved by music critics and the public alike, “God Only Knows” stands the test of time for its harmonies and unique musical structure. But where the song finds its true poignancy is in its lyrics, which find the singer contemplating life without his or her lover. There’s an undeniable beauty in lines like its iconic opening: “I may not always love you. But as long as there are stars above you, you never need to doubt it.”

“To Be Alone With You” by Sufjan Stevens

Sufjan Stevens’ near-perfect album “Seven Swans,” the Christian artist’s most religious album, is filled with beautiful love songs. “The Dress Looks Nice on You” is a shy song about young love still developing a sense of comfort, and “A Size Too Small” explores a similar relationship in a more mature place. But the best love song on the album is the one with the most overt religious references, “To Be Alone With You.” The song finds Stevens exploring the depths of love by drawing parallels to the gospels, but the writing is subtle enough to allow for multiple interpretations.

The inspiration of Clapton’s 1977 ballad is nearly as famous as the song itself. Smitten with ex-Beatle George Harrison’s then-wife, Pattie Boyd, Clapton wrote the song while he waited for her to finish preparing for a party. The result is one of the most enduring classics about unrequited love, a time capsule preserved before Clapton and Boyd’s subsequent marriage and divorce.

“Don’t be Afraid to Sing” by Stars

The capstone to one of Canadian indie pop band Stars’ strongest albums, “Don’t Be Afraid to Sing” examines the uncertainty of a blossoming relationship and the fear that comes with commitment. Singer Torquil Campbell admits, “I won’t pretend that I can see the end,” and acknowledges that time can create distance between two people. But after some worrying and equivocation, the song ends on a confident note: “We all end together.”