“No Service” in review 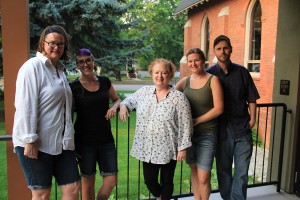 Most would offer the idea that death, or even the prospect of it, is not a laughing matter.

“No Service,” the most recent play from Sandpoint production company Unknown Locals and penned by playwright Chris Herron, challenges that idea with an in-your-face confrontation of mortality that would make the Grim Reaper himself bust a gut.

Friday night’s opening performance of the play, starring Kate McAlister, Becky Campbell, Madeline Elliott and CJ Dowling brought audible gasps and guffaws from a full house audience emotionally invested in the characters 30 seconds in. The night ended with an immediate standing ovation the second the lights dimmed and the curtain fell.

“No Service” is Herron’s fourth original play, following the romantic train wreck “Separate Checks,” the suicidal “Quick Exit” and the farcical comedy “Your Mom.” This play is a rare mix for the area. Said Herron, “In Sandpoint theater, there’s been a lot of comedy and there’s been a lot of drama, but there’s not a lot of hybrids that try to co-mingle the two, and if we’ve done our job right, this one will do that.”

They have, and it has. From start to finish, this play is a roller coaster ride of emotions, both good and bad, sacred and profane. Sometimes, really profane.

The play centers around McAlister’s character Anne. Diagnosed with a terminal illness, she has, depending on which doctor you listen to, either six months or six weeks left to live. She’s decided to hole up in her home, an isolated cabin with crappy cell phone reception, to “pursue an alternative home treatment: drinking.”

The scenario develops quickly with an unexpected visit from Anne’s estranged friend Kim, played by Campbell. Seemingly polar opposite of the bitter and angry Anne, Kim has brought along with her, as either support or protection, her daughter Sam, played by Dowling.

The first act consists of the three characters catching up with each other, and Kim trying to help Anne process what is happening to her, but Anne will have none of that. She’s content with sitting in her home, drinking her Irish whiskey and waiting for the end to come. Whenever that might be.

Throughout much yelling, screaming, laughing, bitching, moaning and bantering, the young Sam makes pointed observations about what Anne is going through and contemplates how she might feel if she were in her shoes.

For such a difficult topic, dialogue reveals a past of troubled circumstances and true friends stepping up to help each other. It resonates as true, raw emotion brought to life on the stage of the Heartwood Center. A combination of the characters’ history and current circumstances allows the cast to reminisce with veiled laughter and palpable bitterness.

And bitter she is. McAlister’s portrayal of a woman resigned to her fate is quite stunning. Rarely leaving her chair, Anne rules the roost with biting wit, sarcasm and humor with brief moments of regret and tenderness.

Act Two brings about a new theme of family estrangement when Anne’s daughter arrives in the dead of night. Hannah, portrayed by co-producer Elliott, is more like her mother than either are willing to admit. Their strained relationship and lack of appreciation for each other plays a strong role in the intense reunion. Hannah wants to find a solution, a cure, a treatment. Anne simply wants to meet her fate head on and sufficiently inebriated. The two characters spend most of the time on opposite sides of the stage, and as the banter continues, Hannah slowly inches towards her ailing mother.

With the aid of both Kim and Sam, realizations are made, past resentments are exposed and are either dismissed or slightly reconciled. Near the end of the play, Hannah and Anne finally come together in a passing embrace and then, in the next few minutes, resolution is brought full circle before the closing dialogue.

As McAlister states, “ I don’t want to give away the ending….but I don’t find redemption.”

As audience members, we were all brought full circle as well. This is a work by a terrific, thoughtful writer, carried out by an amazing, talented group of strong women. And it just might make you take the time to tell your loved ones how you feel about them, before there is “No Service.”

Catch “No Service” for its final weekend of shows 7:30 p.m. Friday and Saturday, Sept. 4 and 5, at the Heartwood Center. Tickets are $12 for general admission and $10 for students/seniors.