A new story on Cedar Street

Pine needles and lavender in coffee. An ancient concoction of apple cider vinegar, ginger, jalapeno peppers and more meant to cure the common cold with one shot. Dog treats.

These are not things the average person anticipates ordering when arriving at a drive-thru coffee shop. And yet, at Understory Coffee and Tea, all of these things are possible — or at least, according to co-owners Johnelle Fifer and Evan Metz, on the horizon. 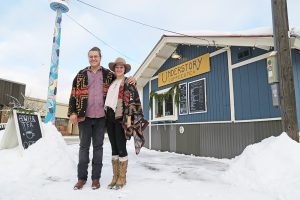 Fifer and Metz took over the drive-thru coffee stand location on the corner of Cedar and 2nd Avenue this fall. The couple said they have been professionally trained by several coffee roasters, but are excited to create their own identity in Sandpoint’s coffee and tea scene.

“We’re both really experimental and creative people. We’re the kind of people who want to be moving stuff around the shop and coming up with new recipes — just experimenting and having the freedom to do that and sell that,” Metz said. “We love the product, and we love the work, we just wanted to be able to have it our way.”

However, the duo, who met while working together at the Moscow Food Co-op in Moscow, Idaho, didn’t initially have it their way. What was meant to be a road trip touring the entire western United States met an abrupt end in Sandpoint thanks to car troubles. Fifer said she and Metz made the best of the unanticipated situation.

“The idea was always to come back to Sandpoint because Evan grew up here,” Fifer said. “[The road trip] is definitely planned, but this time we’re going to make sure it happens and it’s at the right time.”

Fifer, 23, always knew she wanted to own a coffee shop. Metz, 24, always knew — based on his desire to be his own boss — that he’d one day own a business. Upon their arrival in Sandpoint, Fifer went around town introducing herself, and happened upon Heavenly Latte where the owner was looking to sell.

“We kind of just pounced on the opportunity because it was kind of like, if we waited for a walk-in cafe situation, it would probably be years before we could do it,” Metz said. “And as far as drive-ins go we weren’t that keen on the idea necessarily, but like, this particular location is very unique and it’s not like your normal side-of-the-highway stop.”

Fifer and Metz began renovations on Oct. 1. They opened the rebranded building as Understory Coffee on Nov. 20. Both are eager about the possibilities for expansion. Come summer, the owners hope to close down the drive-thru window facing Cedar Street to set up canopies, benches, dog bowls and more to create a “hang-out” feel. They’ll still provide the convenience of a drive-thru window on the other side of the building.

Fifer emphasized that Understory will offer traditional coffee and teas, including drip coffee and loose-leaf organic teas, which aren’t available at many other drive-thru cafes in town. Metz called it a “concentrated quality approach,” different from the average drive-thru, which often attempts to do it all.

“I feel like a lot of a drive-thrus when you go through are about being quick, being really affordable and offering a really wide range of food and drinks. I think we’re just trying to simplify it and dial it back,” Fifer said. “If you want as good of coffee as you would get if you were going to go in somewhere and sit down, you can get it here.”

Providing organic coffee and tea is a priority, Fifer said, and so far she and Metz are succeeding in that area. Understory’s coffee comes from Troy, Idaho, and their tea from Missoula, Montana.

Looking toward the future, Fifer said locally sourced and organic food will definitely be on Understory Coffee’s menu. She and Metz are hoping to use veggies from Sandpoint’s farmers market for sandwiches. They’re planning to use bread and other goods from businesses across North Idaho and Western Montana.

“I feel like if there was going to be one thing that kind of set us apart from a lot of the other places in town is just that we’re definitely trying to do things more local,” Fifer said.

Metz added that while nothing food-related is nailed down quite yet, this is only the beginning for Understory Coffee.

“We’re definitely looking forward to summer because things really slow down in town this time of year, but winter is great because it’s sort of this incubation period where we get to try new things and figure out what’s working,” Metz said.

It’s during this incubation period that Metz and Fifer are hoping community members notice the changes on the corner of Cedar and 2nd Avenue. Namely, they’re curious how people will interpret the building’s new name. Fifer said she, Metz and Metz’s mom spent a week going over dozens of possible names, trying to avoid cliché names that involved words like “java” or “beans.” Metz’s mom started doing research on where coffee grows, and found the word “understory” — which refers to the space between the ground and canopy where coffee grows in the rainforest.

“If you don’t know what it means, the first things that came to my mind were underdog and backstory,” Metz said. “I just liked the way it sounded — I liked the connotation. It had a good vibe to it.”

Fifer has her own reasons to love the name.

“I think most people think to a novel or book, and that’s why we love it, because you can dig deeper, and it’s also a place where coffee grows. It just fit perfectly,” she said.

Fifer and Metz agree that they’re ready to show Sandpoint a new spin on the traditional drive-thru scene.

“Everyone likes things to be done a certain way. I feel like with coffee it’s getting to the point [where] — like [with] craft beer and other artisan food things that you’re seeing a resurgence of — everyone has their way of doing it,” Fifer said. “After a while you’re like, man, I’d love to see what my way is. So we got to do that, and that’s really exciting.”