A Door in the Forest:

An interview with artist Thomas Jenkins

Many of you may already know Thomas Jenkins. He’s been a part of the community for 21 years, a large part of that spent as a teacher at Sandpoint Waldorf School. He’s a kind man who has helped many learn about their artistic side as a teacher. Soon he will be doing his first showing as an artist, with a very unique exhibit displaying at Evan’s Brothers Coffee Roasters during the months of January and February.

The exhibit will feature chalkboard drawings of worldly and local icons expressing joy. He will create these images on-site during the first few weeks of January. For art lovers, this will represent a special opportunity to sit back and watch an artist as he creates. 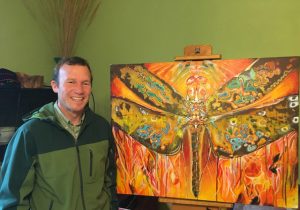 Jenkins loved drawing as a kid, finding that art filled him; it was a pivotal realization that came to him in the seventh grade when he found himself called into an all teacher conference to discuss his performance. As they went around the room, each teacher indicated the challenges they were having with young Thomas’s behavior, until they got to Adrian Montgomery, his art teacher.

“He’s the best student I have,” she told the group.

He didn’t get many opportunities to take art classes again until college, but that moment in the seventh grade sparked a fire inside that would smolder as he made his way through life.

He pursued a degree in architecture, but decided he didn’t want to sit behind a desk all day, so instead he became a Waldorf teacher. Stating that many Waldorf educators become teachers to not only share creativity with the kids, but to experience what it offers themselves.

One day during his Waldorf training, he volunteered to do a chalkboard drawing of Martin Luther King Jr. for a teacher. It turned out beautifully and he went on to create chalkboard drawings, several each year, as part of the curriculum he taught.

During Jenkins’ time as a teacher he had many opportunities to show students how to create their art, but he rarely took the opportunity to complete his own work. Now, as he transitions to creating his art and putting it out into the world on a more public scale, he has come to realize just how much the act of creating fills him and feeds that inner child he had drawn so long ago.

Even having this realization, it can be a struggle to paint on a regular basis.

“I don’t feel the desire to paint until I start and remember how good it feels to be doing it,” he said.

Jenkins wants his art to make us feel joy and recognize how close to us it is, both in the world and in the local community. That’s the premise for his upcoming showing, which will feature faces we know from around town and around the world, expressing joy—such as Abraham Lincoln and a local man—that Thomas has observed as one of Sandpoint’s quiet caretakers, known as Sprouts. Thomas has observed him tending to pieces of town and came to realize how much he and others do to make this town the magical place it is.

Sandpoint has had a significant influence on Thomas’s art, his frequent walks to the Third St. Pier, connect him with the magic he feels here. His time as a teacher at the Sandpoint Waldorf School allowed him to be a part of creating that magic in others, saying his message as he taught the children was, “You are creators and you are closest to god when you realize this and are creative.”

He also spoke to the power and influence of the Sandpoint Men’s Group in his life and artistic journey. How he is able to explore his feelings and the imagery that comes from those explorations.

Perhaps the most powerful impact of living here has been that of his former wife and best friend, Stacy Jenkins.

“Her undying love and encouragement have shown me I can do anything,” he said.

Jenkins offers this advice to artists that are, like him, just beginning to put their art into the world: “Trust yourself. Trust what feels good to you and express that in your art.”

If he had the opportunity to create a piece of art he could place anywhere in town, it would be a large painting of that young boy from so long ago, but all filled up, glowing and alive. He’s riding on the back of a giant dragonfly, which for Jenkins, represents the mystery of the universe. Young Thomas is looking back at us over his shoulder, wearing a pair of motorcycle goggles and a red sports jersey with the #1 shown on its back. He’s grinning and we can see in his eyes the passion of a man with fire in his heart.

Join Thomas at Evan’s Brothers starting on Jan. 6 to watch his creations come to life. For inquiries about Thomas’s art, please contact Noelle Zmuda of Vivre Arts at 208-310-6617