Dine Around Sandpoint is back!

Diners, start your engines. Dine Around Sandpoint is back for its eighth year, and this year it’s bigger than ever.

The premise is simple: dine at one of 31 participating local restaurants any time between Feb. 19 and March 19, receive a ticket, win, repeat. It doesn’t get much easier than that.

Event coordinator and restaurateur Justin Dick said the origin for Dine Around Sandpoint happened when his parents, Mel and Claudia Dick, visited San Diego nearly a decade ago during restaurant week. 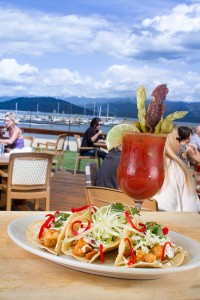 Just one of the many dishes you can enjoy at 31 participating restaurants. This one featured from Trinity at City Beach.

“That was the genesis of the idea,” said Dick. “When we started that first year, we had six or seven restaurants. You only received a ticket if you bought a special meal.”

Now, eight years later, Dine Around Sandpoint has come into its own as a staple in Sandpoint. The program has streamlined quite a bit since the early days. Now, any entrée earns a ticket. Also, there are a few businesses that have entered the contest from outside the box, including Kokanee Coffee, Monarch Mountain Coffee, and new local distillery MillTown.

“MillTown has been a great addition this year,” said Dick. “It’s nice to have one more local group of people doing it right. They’re doing everything on a local property located on a dormant farm. It’s really cool.”

For Dick, the time of year mattered the most for when to hold Dine Around Sandpoint.

“The original idea was to bring in business during the specifically poor time of year,” he said. “Right after Winter Carnival was always a tough time.”

Now, the event even draws diners from Bonners Ferry, Hayden Lake, Newport and beyond. Also, according to Dick, the event has fostered a new relationship among business leaders in Sandpoint.

“The great relationship between retailers and restaurants has been an unintended positive consequence,” he said. “The retailers are welcoming any types of donations to be given out to be part of it. Usually it’s always a divide and conquer between myself, Mel and Dave Vermeer. I’m coordinating myself this year and it’s been one of the easiest years. It really seems to have gotten a foothold.”

Throughout the monthlong program, there will be daily drawings for over 70 prizes donated by local businesses.

“We usually draw from two restaurants per day,” said Dick. “All the daily prize winners go back into the collective for the big prizes.”

The grand prize is a free dinner for two at twelve participating restaurants, once per month. Other big prizes include a pair of Festival at Sandpoint season passes, tickets to the Festival’s country night concert, a pair of tickets to see David Crosby at the Bing Crosby Theater in Spokane on March 18 and a $500 gift basket from MillTown Distillery.

Check to the right for a list of the 31 participating restaurants. Now get out there and check out what our local restaurants have to offer!