In just over a week, Sandpoint High School’s graduation is set to take place at War Memorial Field. Though the entirety of the grandstands project won’t be completed by then, project supervisor Gannon Reynolds with Northcon, Inc. said the crew is putting on the finishing touches so that the stands are safe for graduation attendees. Reynolds said the crew is currently putting in handrails and pouring concrete to be ready by June 9, but the entirety of the project is estimated to be completed by July 21 in preparation for the Festival at Sandpoint. 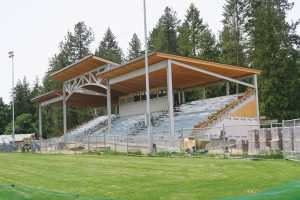