Idaho state fire marshals ruled out arson last week in its investigation of the First Avenue fire that gutted historic downtown buildings in February, but the exact cause remains undetermined. 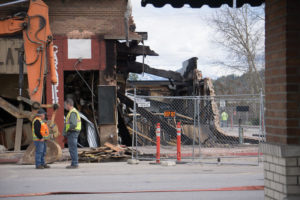 Investigators look on while contractors begin demolition of the historic building on First Ave. and Bridge St. in Sandpoint. Photo by Racheal Baker Photography.

With the fire determined to be accidental, investigators believe that it first ignited in the basement between the lower level ceiling and first level floor of 202 First Ave. at the wall between the Chocolate Bear and the former Ol’ Red’s Pub. The fire than spread to engulf both 202 and 204 First Ave., destroying both buildings. A third building sustained heavy damage from fire and smoke.

The fire dealt an estimated $4 million in damage to downtown buildings and infrastructure.

“As we cleared the debris in the basement of 202, the point of origin became clear when we found the glass door to Ol’ Red’s intact. That became a real game changer,” said Deputy Fire Marshal Jason Blubaum in a press release.

“I would like to again reiterate that the fire department did an excellent job and deserves recognition for their efforts,” he added.

First Avenue was closed between Pine and Church for several days last week while investigators conducted their work. An excavator demolished building walls to the sidewalk level in the process, and investigators wore Hazmat suits to avoid potential asbestos exposure, since testing for the substance couldn’t be completed due to structure instability. As work proceeded into this week, heavy equipment gradually cleared away building remains.

According to City Administrator Jennifer Stapleton, the city is doing its best to mitigate impacts, both from the investigation and from the unsightly building wreckage, to downtown businesses. With the traffic impacts from the investigation no longer a factor and fencing pushed back to widen driving lanes, city officials are turning their focus to beautifying the area.

Collaborating with the Bonner County History Museum, the city is using a $7,500 grant from BNSF Railway to erect non-transparent vinyl panels imprinted with historic images of downtown Sandpoint. The panels are meant to keep bystanders out of the potentially dangerous wreckage area while providing pedestrians with more pleasing visuals that honor downtown Sandpoint’s historic legacy.

Businesses devastated by the fire have since begun to pick up the pieces. Sandpoint Chocolate Bear, for instance, announced on Facebook it was ordering new equipment and moving to a Spokane Valley location.