Palouse Falls hiker who fell to death was not taking selfie

The mother of 25-year-old Cade Prophet from Sandpoint, who slipped and fell to his death at Palouse Falls State Park on Monday, is calling on Spokane news agencies to stop reporting her son’s death as caused by a selfie.

Dorothy Prophet is asking for a retraction from several media sources in Spokane that claimed falsely that her son was taking a selfie at the time of his death.

“The truth of the matter was that he was not taking a selfie,” said Prophet. “He was standing on the ledge to see where the trail went, and the shale rock beneath his feet crumbled, and he fell.”

Franklin County sheriff deputies were dispatched to Palouse Falls State Park around 2:30 p.m. on Monday, May 29, after reports that a man had fallen from the edge of the cliff overlooking the pools. Columbia Basin Dive Rescue, Pasco Fire, Kahlotus Fire and Kennewick Fire all responded to the incident.

Rusty Bell, a volunteer diver with Columbia Basin Dive Rescue ultimately located the body of the fallen hiker on Tuesday.

“We were able to locate where he went in at,” said Bell. “We dove that area and had him up in seven minutes. I found him myself.”

“All I stated (when talking to news agencies) was that we were there looking for him,” said Bell. “Never at any point did we say he was taking a selfie.”

Bell said further that this is not the first time broadcast news has made mistakes with his dive team.

“They always seem to screw it up,” said Bell. “For 15 years, they’re always screwing it up. It’s out of control. We give them a sheet of paper with details and facts, and they screw it up.”

Bell said he blames the fact that there is such an impetus with broadcast news to get a story out quickly that they ultimately botch important details, such as the cause of the fall in this case.

“When we arrived, you could see the skid marks where he slipped,” said Bell. 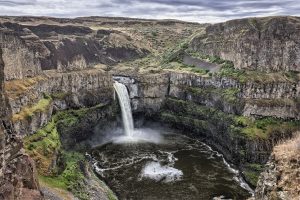 Franklin County Sheriff’s Captain Rick Rochleau agreed with the mother’s claim that Prophet was probably looking for a trail down and not taking a selfie: “I think what she is saying is accurate. There was some talk about selfies but I don’t believe that was what they were doing at the time this occurred.”

The statement released by Franklin County Sheriff’s Department said, “The victim’s girlfriend stated they were hiking and taking a picture when her boyfriend lost his footing and fell.” There was no mention of a “selfie” being taken in the statement.

After reaching out to KREM-2 News staff for comment on where they obtained the information that Prophet was attempting to take a selfie before his death, News Director Noah Cooper said: “The reporter that was working on that story for us Monday night received that information from a source on the Columbia Basin Dive Rescue team.”

For the grieving mother, the fact that her son’s cause of death was attributed to a selfie made it even more difficult to deal with an already traumatic situation.

“They try to make the people look like they’re doing something negligent,” she said. “I’ve emailed all the media reporting it to retract their statements. They’re making it out like my son was stupid. He wasn’t stupid. He was an avid outdoorsman; he hiked a lot. Yes, he got too close to the edge in an effort to look over, but there is shale there and people need to be aware that rocks crumble.”

Prophet said “There used to be safety railings there and they took them out because they impaired the beauty of the natural scenery. Other people have died in the past two years since the safety railing was taken out. We need it back there.”

Washington State Parks had indeed installed temporary fencing in 2015 out of concern for the unmarked trails at the falls, but the fencing was removed in 2016 due to complaints from hikers that it obstructed from the views of the falls.

Warning signs were installed notifying hikers that travel beyond the signs is hazardous and to use trails at their own risk.

For volunteer diver Bell, the incident was yet another wake up call for people to be aware that these unmarked trails surrounding Palouse Falls are dangerous and should be respected: “It’s a wonderful place to go, but you have to respect it and use your common sense.”

“I’m not saying he wasn’t supposed to be by the edge, but he wasn’t taking a selfie,” said Prophet. “I am hellbent on not only getting them to state the truth, but get on a campaign to get those railings back there.”

Right before press time, Dorothy Prophet notified the Reader that KREM-2 News had contacted her and said they will print a correction, as well as help her launch a campaign to re-install railings along the dangerous cliff edge.