Artists have a reputation for toiling alone, pouring their creative energies into their work in a solitary struggle between their vision and ability to bring it to fruition. While that may often be true when it comes to sitting down at a canvas or workbench, it’s equally true that it takes a community to support the artistic process in its entirety. 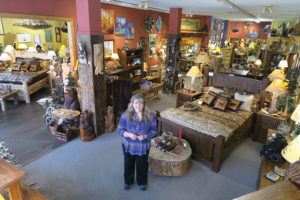 That’s been the central philosophy to develop at Northwest Handmade Furniture Gallery, which celebrates its 25th anniversary Saturday, Oct. 26 in downtown Sandpoint.

“This is such a community-type of business,” said Laurie Huston, who took over the store at 308 N. First Ave. when her mother and stepfather, Pamela and Dan Mimmack, retired in February 2015.

Huston said the business started with Dan selling his hand-crafted log furniture through a downtown artist’s cooperative. Finding success, Northwest Handmade soon needed to establish its own space. That happened with another collaboration — partnering with a T-shirt shop to share space.

“It worked well for us at the time,” Huston said. “We all worked full-time jobs and then worked the store as it grew.”

While Dan was the primary builder at first and Pamela ran the store, it came to pass that a local artist brought in some hand-painted magnets and asked if they could be put up for sale in the store.

“It just grew from there,” said Huston, who came aboard to help bring in and support more and more artists.

Today, far more than a simple furniture shop, Northwest Handmade is a co-op featuring the work of 130 creators from throughout the region who sell their work on consignment to customers from as far afield as England.

While the member artists contribute the products of their labor — everything from chairs and tables to custom decor and objets d’art drawing on a range of media including wood, metalwork and more — Northwest Handmade handles the ordering, shipping, advertising and sales tracking. “Anything that’s needed to help support getting that artist’s work sold,” Huston said.

“That’s been my passion, bringing in all that art. Celebrating that creativity,” she added.

To celebrate 25 years worth of that creativity, Northwest Handmade invites all comers to attend a party Saturday, Oct. 26 from 4-7 p.m., featuring food and drink from a to-be-determined downtown restaurant, live music from Kelly McTavish and Shanna Thompson, and prizes and giveaways from member artists, including artwork and small furniture pieces.

“It’s about celebrating them and community,” Huston said, adding that she chose this time of year to host the anniversary because the tourists are mostly gone and, amid ongoing street construction, downtown merchants can use as much foot traffic on First Avenue as they can get.

Mutual support among fellow businesses is also something Huston wants to celebrate with the anniversary.

“There’s this really neat cohesiveness,” she said of the Downtown Shopping District. “This is the most people that have ever participated, just supporting each other. In the past, there would be feuds among some of the stores — now, it’s more community over competition, and that’s been a huge shift.”

As for how downtown street work has affected business, Huston said “it hasn’t been as bad as we anticipated. People are making a point of coming down.”

That’s part of a larger trend toward buying local — both among area residents and out-of-towners.

“More and more people are becoming conscious of that; they want to support community,” she said. “People are realizing the value of how they spend their money and how it impacts everyone else.”

On the occasion of the 25th anniversary, Huston said she has reason to be optimistic about the next 25 years — and the near future, as well.

“Even though downtown’s torn up right now, it’s kind of like this cocoon phase. There’s so much going on underneath, not just infrastructure. Once the veil comes down, you’re going to see all these new stores,” she said. “It feels pretty good. I’m excited. I’m happy downtown.”