After 75 years, the venerable downtown bar Tam O’Shanter is under new ownership.

Former owner Sandi Terry announced this week she has sold the bar, known locally as the Tervan, to Daniela Caniglia and Russ Sabin. The new owners say longtime Tervan fans need not fear: All the local history, memorabilia and community spirit that define it will stay the same. 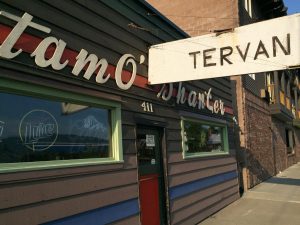 “I wouldn’t want to change a thing about it,” said Caniglia. “I love it the way it is.”

Terry said she decided to sell the bar after years of direct management. Four years ago, she took over handling the business from the previous leasee to conduct a series of comprehensive renovations and repairs. Thanks to local craftsmen, the bar was back in fighting shape within three months. John Pucci, who laid down the new concrete, told her he remembered being a little boy when his father and grandfather did the same job years ago.

“To this day I have people coming in and telling stories about their memories [of this bar],” Terry said.

Eventually, the job of managing a bar got to be too much for Terry, she said. At 68 years old, she decided she was ready for retirement and reached out to her son, the only direct member of the family young enough to take over. When he declined, she decided it was time to put the establishment in new hands.

“It needs someone that’s excited, motivated and has the energy to [manage it],” she said.

Caniglia and Sabin turned out to be those people, and Terry felt comfortable putting the Tervan in their hands. According to Caniglia, they know what people love about the bar and don’t intend to change that.

“We just want to continue on the legacy, really,” she said.

A veteran of restaurant ownership and management, Caniglia said she might bring in a few food options somewhere down the line. She aims to set up a covered patio outside to serve as a no-smoking and dog-friendly area of the bar. And with the Tervan serving as an excellent spot for viewing parade routes, she may set up cameras that send video feed to TVs inside, so bar patrons can enjoy local events like Lost in the ‘50s or the Fourth of July. Otherwise, she wants to maintain the bar as a downtown location rich with history and a welcoming location to have a drink and a cigarette.

“This has been a local watering hole for more than 70 years,” she said.

To celebrate the new era, Caniglia and Sabin are hosting a grand re-opening party at the bar on Saturday, Dec. 3. They invite the community to come down and hoist a drink in honor of the Tervan.

The business sale represents the end of an era given its long ownership by a single family. According to Terry, the bar factored into her mother and father’s marriage. While the legend has grown to imply that the couple met and became an item at the Tervan, Terry said that in fact, her father met her mother at a different establishment. He later bought the Tervan, where her mother ended up working.

It’s just one of the many bits of lore that the Tam O’Shanter has collected over its long history. But the bar’s most enduring legacy is likely its community. Terry called them the Tam family, and in many ways, they were just that. When someone needed help with bills, fellow bar patrons would throw them a fundraiser, and when someone passed away, they all turned out for the funeral. It’s those people that Terry will miss most, she said.

“These were loggers, mill workers—the blue collar of Sandpoint—and they were as generous as they could be with their neighbors,” she said.