The Cougar Fire made substantial moves this weekend, as the blaze jumped Lightning Creek headed northeast and tripled in size.

The fire, located five miles east of Hope, was a reported 3,454 acres on Monday morning, according to InciWeb.

Officials on the Cougar Fire initially intended to use Lightning Creek as a fuel break, but windy conditions Friday night into Saturday morning caused the rapid spread of log-to-log burning and group torching. Fire Bosses — small planes that can pick up water — have been utilizing Lake Pend Oreille and dropping on the Wellington Creek ridge to slow northern fire growth. Map of the Cougar Fire as of Aug. 13. Click to enlarge.

The west side of the Cougar Fire, facing Hope, is being monitored but not making any substantial moves.

The Smith Creek Fire, seven miles north of Priest Lake, was over 800 acres as of Sunday. The slow-moving blaze is not expected to grow substantially, and is contained mostly to timber litter and understory brush, InciWeb reports.

The Copper Mountain Fire, on the Canadian border near Eastport, is also slow moving. Reported at 180 acres and 20 percent contained on Monday morning, U.S. and Canadian resources are being used to control spotting on this fire. 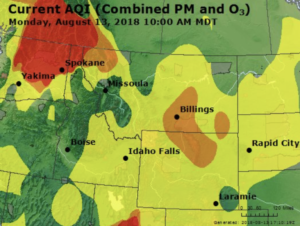 At 200, the air quality becomes “very unhealthy,” meaning everyone is at risk for serious health issues. Air quality is forecasted to improve, but conditions change quickly.