Origins stories are always fascinating. Martin Stamper was born with a condition that makes his heart beat so fast it doesn’t pump blood, causing him to pass out from time to time. While hiking in the Appalachian Mountains in his home state of Virginia, Stamper was tasked with coming up with a “trail name.” The only one that would do was “Fast Heart Mart.” 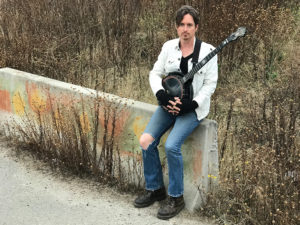 Twenty years later, as a traveling musician, Stamper still goes by that moniker as his stage name.

“Don’t worry, I now have a defibrillator that shocks my heart back into beating so I can keep singing songs about questioning the system, the big picture, bugs and other fascinating things,” Stamper said.

Fast Heart Mart will stop in Sandpoint on his swing around the country for a couple of free live shows next week. He’ll be at MickDuff’s Beer Hall on Tuesday, Aug. 27 from 6-8 p.m. and again at The Fat Pig on Wednesday, Aug. 28 from 6:30-9:30 p.m.

The prolific songwriter has 15 albums to his credit, each providing a keyhole view into the life and times of Fast Heart Mart. His songs are full of fast banjo and guitar riffs, catchy lyrics that make you laugh and cry, and foot-stomping beats that kill the doldrums on sight. There is an honesty and accessibility to Stamper’s songs that quickly wins over those in the audience.

Some might mistakenly put Stamper in the bluegrass or Americana box. They would be wrong.

“I was raised in the mountains,” Stamper said. “We always called it ‘mountain music.’ Mountain music is different … it wasn’t until the early 2000s with ‘O Brother Where Art Thou?’ that the world started to know about it.”

Stamper said his origins with mountain music morphed with his early musical influences to create the style he throws out today, which, according to Stamper, is “something like Nirvana meets Johnny Cash with a little bit of Violent Femmes. I call it punk grass these days, if I’m feeling in a good mood.”

Stamper’s influences come far and wide, but first and foremost he said he’s a lyricist before a musician.

“I started out writing prose,” he said. “I love the whole Rorschach thing, where every time you listen to a song, it can be different depending on your mood. I think for a folk song, it’s hard for that kind of music to live on, so a lot of folk songs have a story that keeps it alive. I try to write something that has a story to it. The common people can hold onto that and the song can become more timeless.”

Part of Stamper’s story has been working through anxiety and depression. The best method he’s found so far: channeling difficult emotions into something useful by writing songs to share with people.

“I knew it was never going away,” he said. “I would have to do what singers I loved did: turn it into something beautiful and useful for the world, so when they hear it, they won’t feel so alone.”

While Fast Heart Mart occasionally plays with a full band, his appearances in Sandpoint will be solo, but backed with a bass track he records beforehand.

If his upcoming local shows are anything like his past work, they should not be missed.