Idaho voters will have a chance to vote for or against Medicaid expansion on Idaho’s Nov. 6 ballot, Secretary of State Lawerence Denney announced Tuesday. 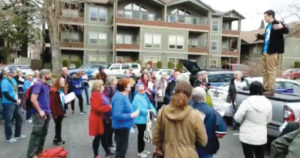 The ballot initiative needed more than 56,000 signatures from 6 percent of registered voters in at least 18 legislative districts across the state.

All verified signatures — more than 70,000 — were delivered to Boise July 6 by volunteers under the banner Idahoans for Healthcare: a coalition of activists, healthcare providers and businesses who support “closing the health coverage gap.”

“When I first heard that our Medicaid Expansion initiative made the ballot, I was not very surprised because I knew that we had done all the work necessary to qualify,” Mayville told the Reader Wednesday. “However, seeing the official statement gave me an overwhelming feeling of joy on behalf of all of the local leaders and volunteers who worked so hard to beat the odds. This is their victory.”

Strizich’s wife, Emily, has also been a face for Reclaim Idaho, and was introduced on July 6 as co-chair of IFH along with republican state representative Christy Perry.

Moving forward, Mayville said Reclaim Idaho will do what the group does best: travel the state and talk to voters.

“During the coming months, our campaign will host events and knock on thousands of doors to make sure that every voter is aware of this historic opportunity to bring tax dollars back to Idaho and extend healthcare to 62,000 people who desperately need it,” he said.