When Glen Rolofson noticed a peculiar substance on the shore in front of his home in Ellisport Bay in early July, he came to a conclusion no lakefront property owner wants to experience. 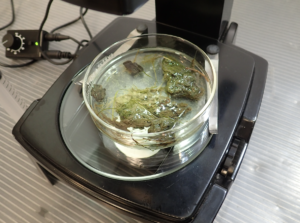 “It looked exactly like human waste,” he said. “My wife and I raked some of it up, and as we were throwing it away we realized that it kept coming. We wouldn’t let our grandson swim in the water.”

Rolofson showed photos and samples to neighbors and friends, all who also thought it was human feces, he said. After contacting the Idaho Department of Environmental Quality (DEQ) and Panhandle Health District — neither of whom came to see his shoreline for themselves right away, he said — Rolofson contacted the Bonner County Sheriff’s Office in hopes that someone would come look.

A deputy visited Rolofson’s home on Red Fir Road and Rolofson said the deputy was also convinced that is was human feces.

Rolofson said he and his neighbor bagged up samples of the mystery substance and she took them to DEQ in Coeur d’Alene.

DEQ Regional Water Quality Manager Thomas Herron analyzed the samples. In an email to Lakes Commission Coordinator Molly McCahon, Herron wrote: “We just finished looking at the samples and it is a filamentous algae that has gotten entwined in Eurasian water milfoil and rolled up into cylindrical wads with tapered ends. I can see why people think it is what it looks like, but I have seen these filamentous wads form from various types of filamentous algae before. They trap gas and can float to the surface and drift into shore.”

Herron told the Reader Wednesday that there is not an easily known reason for this algae making a pronounced appearance on local shorelines, but possible causes include a recent milfoil treatment loosening the weeds, a mass algae die-off, or increased nutrients in the water feeding an influx of algae.

He said the northern part of the lake is especially full of nutrients (like phosphorus and nitrogen) from roads draining close to water, increased activity on homeowner’s shorelines (like lawn fertilizing and removal of buffer vegetation), nutrient loads coming from the Clark Fork River, and septic systems.

“We try to encourage people to live light on the lake,” Herron said, noting that keeping buffer vegetation on lakeside lawns and maintaining septic tanks are best management practices that DEQ encourages to keep nutrient levels down.

Herron said there’s no need to fear that this particular substance is human feces.

“We don’t have any evidence of anything but algae washing up on the shore on Northern Lake Pend Oreille,” he said.