Reader staff picks for the Festival at Sandpoint

There are a lot of great acts coming to the Festival next week. Here are some our staff is excited about 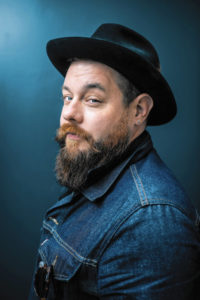 Nathaniel Rateliff & The Night Sweats’ 2018 release “Tearing at the Seams” opens with driving drums followed by a layer of groovy bass guitar, then horns, an organ with gentle vibrato and, finally, Rateliff’s signature vocal delivery, which mingles jump blues with soul, gospel and country. That opening track, “Shoe Boot,” exemplifies the effortless-meets-impassioned sound that made me fall in love, and which I’m confident will make more than a few fellow lovers at War Memorial Field on Thursday, Aug. 1, when the eight-piece band plays the Festival at Sandpoint.

Writing a summary of Rateliff’s style while listening to his work is — physically, at least — almost impossible. I fight head bobbing and foot tapping to keep my fingers placed on the correct keys as “You Worry Me” and “Coolin’ Out,” which features Festival show opener Lucius, play a little too loudly in my headphones.

Missouri-raised frontman Rateliff dabbled in heavy rock, country and folk before placing a strong foothold in the soul and vintage R&B realms in the early 2010s, but not without incorporating those earlier elements to create something entirely his own. Above all, Rateliff’s robust, ripping vocals shine on both studio and live tracks, making him and his band a Festival must-see.

Read the “history” portion of Kool & the Gang’s website and you might as well read the modern history of American funk, rhythm and blues, rock and soul. The term “icon” comes close to assessing the influence and importance of Kool & the Gang to the American songbook, but it doesn’t quite do the band justice. Institution? Lodestar? Superstar power group? Nothing fully fits; yet, where words fail, music succeeds — and Kool & the Gang has been succeeding non-stop since 1969.

Of all those accolades and honorifics, perhaps the most profound achievement of Kool & the Gang is not only carving out an inimitable place in American culture but staying relevant and in-demand for half a century. From “Jungle Boogie” to “Celebration” to “Get Down On It,” the band has been both timely and timeless: its hits hit hard in their day and kept on hitting as subsequent generations of artists including Jay-Z, Madonna, Janet Jackson, P. Diddy, the Beastie Boys and many others riffed on its work, making Kool & the Gang the most sampled R&B group in history next to the Godfather of Soul himself, James Brown.

Be a part of history when Kool & the Gang comes to the Festival at Sandpoint, joined by opening act Leroy Bell & His Only Friends. It almost goes without saying that this is a dance show, so come ready to get down on it.

In a world saturated with doppelganger bands all bobbing to the same rhythm, it’s refreshing to encounter a group that strives to pull away from the herd. Walk Off the Earth, a four-piece originally from Ontario, Canada, defined itself early as an indie pop band unafraid to be different. The band’s rendition of five people playing one guitar to Gotye’s “Somebody That I Used to Know,” has earned almost 200 million views.

Besides being known for quirky pop covers, Walk Off the Earth throws the kitchen sink into every song, with each member playing a plethora of fun instruments. The result is a sound that is both different and easy to bob your head along to, making this a great choice for the Festival.

Putting this show over the top for me was the fact that Sandpoint’s own Shook Twins will serve as openers. Rumor has it Laurie and Katelyn Shook began singing in the womb together, and it shows with their crafted vocal harmonies and up-tempo style that also lives refreshingly outside easy genre labels.