“It is too early to clothe me in sainthood.

I myself do not feel to be a saint in any shape or form.”

is not to be morally perfect, but to be exemplary in love.”

Mohandas K. Gandhi, better known as the Mahatma (“great soul”), would have been 148 years old on Oct. 2. I would like to take the occasion of his birthday to reflect on what it means to be a saint.

In response to the traditional view that the saint is morally perfect, philosopher Robert Adams counters that “saintliness is not perfectionism.” If we look at the lives of the saints, we will indeed find a few moral flaws. Even Jesus said that “no one is good but God alone” (Mark 10:18), and the Buddha begged his disciples not to deify him.

The achievements of both Gandhi and other saints appear to go far beyond the resources of their respective background and character. Like the prophets of old they were very unlikely and somewhat reluctant political and spiritual leaders. Many attributed their success to divine grace, and this presumably explains why they were able to exhibit great love and compassion while still remaining flawed human beings. 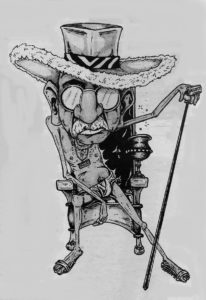 “Ghandi the pimp” by Zach Hagadone.

Susan Wolf, another philosopher who writes about saintliness, offers qualities such as “personal bearing, creativity, and sense of style” as necessary to the saintly life. These attributes could be summed up by the word “charisma,” so I propose that we should look for moral charisma in our saints.

The Chinese sages are filled with “de,” which can be translated as “virtue,” “power” or “charisma.” It is the linguistic equivalent the Latin “virtus,” but it is significant that it is not gendered in the way that “virtus” is as manly power. Indeed, the Daoist classic “Dao De Jing” favors the feminine over the masculine. “De” is also intimately related to “qi,” the cosmic energy out of which everything arises and from which all things get their vitality.

The Pentecostals and their predecessors are criticized for too much “enthusiasm,” but they are closest to Chinese “de” and Ferdinand Galen’s view that “virtue is enthusiasm.” As Phyllis McGivney observes: “The saints differ from us in their exuberance, the excess of our human talents. Moderation is not their secret.”

The souls of saints are not morally perfect; rather, they are great in vitality, compassion and courage. Gandhi in particular had a broad vision of cultural, political, moral and spiritual possibilities. His commitment to recognizing the good in every religion and every person, his strong empathy for his enemies, and his ability to draw diverse people to his cause make him an outstanding charismatic saint.

The theory of the charismatic saint allows us to canonize both Gandhi and Martin Luther King even though they both had moral weaknesses of a sexual nature. Just like Bill Clinton, King’s handlers procured women for him, and the FBI obtained tapes of the liaisons.

Although Gandhi most likely did not have sexual relations with any of the women he invited to his bed, I argue that his sins are greater because he, unlike King, did not seek forgiveness for his sins. The goal in Gandhi’s sexual experiments was to test his vow of chastity, and Gandhi once declared that he would sleep with a thousand women if that is what it took to reach spiritual purity.

The Buddha and Christ are clearly our foremost ancient practitioners of nonviolence. Christ’s message that we are to love even those who hate us is essentially the message of the Buddha. Both knew very well that hate figuratively burns a hole in the heart. Both were Great Souls whose virtue shines down through the ages.

Equally remarkable, particularly because we know their personal histories and weaknesses so well, are the lives of Gandhi, King and Mother Theresa. Taking the ancient saints of nonviolence or our more recent charismatic saints as our models, let us all try to develop the virtue of nonviolence until it becomes as natural as taking a breath.