Not your average rap album

Kendrick Lamar’s “DAMN” gets weird in all the right ways 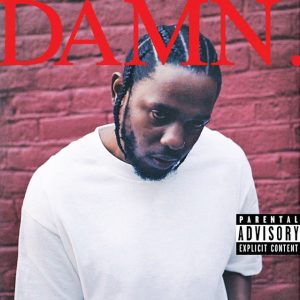 I can probably attribute this love for rap to my time as an athlete. Every volleyball and basketball game couldn’t actually begin until our warm-up playlist—most often comprised of Lil Wayne and Drake songs—echoed through the high school gym. Rap consistently made up my soundtrack of competing, facing challenges and being powerful.

As I got older, rap remained a big part of my life, but the lyrics started to mean more than the sick beats. I enjoy that socioeconomic issues dominate much of modern rap’s rhetoric, even amidst the more lewd topics that give rap its less-than-stellar reputation. And every so often, an album stops even the most casual listener in their tracks.

Kendrick Lamar’s latest release, “DAMN,” is one such album.

When the first single, “HUMBLE,” dropped in late March, I first heard it when I watched the music video, released on Kendrick’s Twitter. The straightforward baseline and piano chords intrigued me, but what struck me most was the video.

The imagery was so clearly making a comment on religion, but then it was making a comment on race, and then suddenly female standards were being thrown into the mix. Now, after seeing the video multiple times and living with a roommate who did a literary analysis of it for a 400-level college course—true story—I am no less impressed with the initial shock the video caused.

What makes “DAMN” such a landmark in recent rap releases is all the risks it takes. It gets weird—but never so weird I wanted to give up and go back to Drake. “DAMN” vibes like no Kendrick album has vibed before, which can be attributed to multi-faceted beats and the rapper’s ability to alternate between aggressively clean lines and smooth sung verses. There’s voices being played backward, clips from Fox News segments and riddles throughout.

But where Kendrick really shines with “DAMN”—and this can’t be understated—is in his storytelling capabilities. “DUCKWORTH” is all the proof a listener needs. I’d hate to spoil it here, but the true story of a kid from the hood finding his way into a high-end recording studio began long before Kendrick was even born. Give it a listen.

Granted, “DAMN” has a few rough spots. “LOYALTY,” his collaboration with Rihanna, lands as flat as any attempted radio hit should. “LUST” and “LOVE,” meant to play off of one another, don’t fit well into the overall narrative of the album. “LUST” feels like an uncomfortable drift in and out of sleep, and “LOVE” is sure to hook a few 16-year-old girls dabbling in rap, but won’t make any noise with those more familiar with Kendrick’s abilities.

Those apprehensive of mainstream rap shouldn’t write the genre off until spending time with “DAMN.” The rhymes are clean and thought- provoking. Most tracks go through numerous moods in a seamless fashion. This album tells a story with an unforgettable ending. Those unwilling to admit Kendrick is one of the rap game’s greatest innovators should sit down, be humble and listen to “DAMN.”