The two things we love most: Ooey-gooey things and lizards! If they fired exploding insects the size of planets out of their mouths, it’d be a match made in Mad About Science heaven.

Luckily for us, salamanders don’t do that. Oh man, could you imagine? Awesome.

You’ve probably seen a salamander or newt at some point in your life, though it likely wasn’t in the wild. More than likely you’d stumbled upon cage of them at a pet shop or a collector’s house. Are they lizards? Are they frogs? Are they dangerous?

Nope, nope, and well… Some of them can be.

Salamanders are amphibians, like frogs. Similar to frogs, they lay their eggs in water and have larval babies. What that means is that their offspring look like squirmy little tadpoles and they eventually metamorphose into full blown salamanders. Most of the time.

Some salamanders are neotenic, which means they retain much of their larval attributes into adulthood. Axolotls, sometimes called Mexican salamanders (or Mexican walking fish, despite not being a fish) are the most obvious example. They have funny feathery-looking gills jutting out of their heads, which they use to filter air from water so they can breathe. Their tails also look much like a large tadpole’s. 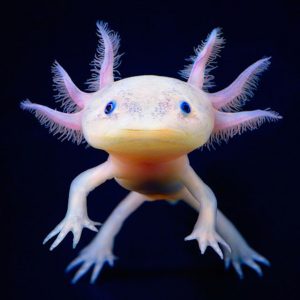 The Axolotl, or “Mexican Salamander.”

Not every salamander is like that, however. Some will shed their gills during metamorphosis and develop lungs that allow them to breathe air on the surface. Others won’t develop lungs, but will be able to respire through their skin, which is pretty awesome.

Mucus glands in their skin keep their skin gooey and allow it to both keep them cool from the heat and also filter air and keep them from getting bad infections.

Most species of salamander can also regenerate limbs. I don’t mean like creating scar tissue over a wound, I mean that if one gets in an accident or a fight and its entire arm gets ripped off, it’s capable of growing the whole thing back.

Could you imagine if we figured out how to do that? Doctors have been studying these little guys for years to find out how and why they can do this. They believe there may be applications for modified cells that could help battle things like HIV and cancer or repairing nervous connections in the spinal cord, which would benefit people that have been partially or completely paralyzed by accidents or disease.

Not all salamanders are looking out for your good health, however. Some are, like certain tropical frogs, excruciatingly poisonous. Luckily nature has labeled them with bright cautionary “don’t mess with me” colors, so if you’re ever unsure about whether or not to pick that amphibian up and put it in your mouth, nature has your back.

Though if you’re putting strange creatures into your mouth to test their lethality, nature is probably taking its course in another direction.

Speaking of putting strange things into your mouth, salamanders share a similar feeding pattern to the one I had adopted through my early 20s. If it fits in their mouth, they will eat it.

There’s an actual term for this, and unfortunately it’s not Pac-Man Syndrome. It’s called opportunistic predation, and it’s an important survival tactic for small omnivores in areas where they’re not the biggest guy on the block.

This also means that if you own a salamander as a pet, you should be pretty careful about what you put in its area. They are not equipped to eat everything but gasoline like we are, and in captivity they need to have a pretty restrictive diet or they’ll get sick and probably die.

Salamanders and newts (another species of salamander with some variations to their physiology) can make great pets if you’re into raising the unusual creature, or are allergic to animals with hair.

However, they’re a surprising amount of work and definitely not recommended for a first time pet buyer. Being amphibians, most like to be able to get out of the water if they need to. Depending on where they’re from, they might need a certain temperature of water, and the water also needs to be treated. While chlorine might be great for us, it wreaks havoc on creatures that need water in order to breathe.

Repeating myself from every other article I’ve ever penned about pets: Do your research. Animals are not an impulse buy. They are living creatures worthy of your attention and care. They depend on you to keep on living and living well. If you feel laziness creep in, just put yourself in their situation. How would you feel in a glass cage and an owner that “doesn’t feel like” feeding you?

Speaking more on the awesome side of salamanders, did you know that they have carved out a niche of mythology? As far back as the 1300s, Westerners have attributed salamanders to fire; great beasts capable of controlling huge blazing infernos. Awesome! But why? Aren’t they around water?

They sure are! The origin of this myth seems likely to come from the nature of wood people burned throughout Europe at the time. Large, half-rotten trees felled by nature were a lot easier to carve up and dump on a bonfire than tall growing trees that needed a season to dry out. Turns out salamanders may have enjoyed these wooden husks as a home, and as soon as thing started heating up they would just start spilling out of every nook and cranny to terrify the humans around the fire.

Pretty crappy for the extra crispy salamanders, but at least they got a cool reputation out of it.

I’ve got one last bit of awesome amphibian information for you. This whole time, you’ve been imagining cute little gooey guys that can fit in the palm of your hand.

Turns out that Japan, home of the weirdest and most awesome things on Earth, plays host to something called the Japanese giant salamander, or osanshouo (giant pepper fish). These guys are vulnerable and considered a federally protected species in Japan. While their Western cousins are attributed to fire in myth, these guys have inspired the Japanese myth of the Kappa, or an amphibious beast that would emerge from rivers and devour people.

While at first you might find this silly, might I remind you that these beasts can get up to five feet long and eat anything that fits in their mouth.

I’m fairly sure at that size, Shaq’s big foot could fit in one of their mouths.