Making a difference, one ski lap at a time

It’s easy to grow disillusioned with the world, it seems. Then you meet someone who changes your life. For Matt Gillis, meeting young Henry Sturgis—otherwise known as “Hank”—was the event that kicked him into the reality that he could change the world, one ski lap at a time. 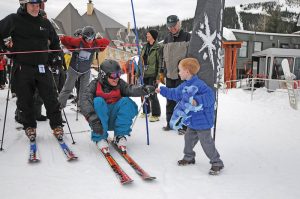 Hank was born with an extremely rare genetic disease called cystinosis, which affects about 2,000 people worldwide, mostly children. The disease causes the amino acid “cystine” to accumulate in the body’s cells. As the cystine builds up over time, it slowly destroys the functions of certain organs like the kidneys, liver, muscles, eyes, white blood cells and central nervous system.

Gillis met Brian Sturgis, Hank’s father, while they were both employed at Coldwater Creek.

“We shared a lot of the same interests,” said Gillis.

Both Gillis and Sturgis shared ski racing backgrounds. As they became closer friends, Sturgis opened up to Gillis and told him about the details of their situation and struggles with Hank’s diagnosis.

“We began kicking around the idea of endurance type events that revolved around the mental and physical toll cystinosis played on their family, but more importantly, Henry,” said Gillis.

Gillis joined the 24 Hours for Hank board, which raises money for cystinosis research. He and the board began formulating the plan for a fundraising event that would involve 24 hours of skiing.

“I felt it was necessary to pay it forward,” he said. “I’ve been very fortunate in my skiing and the opportunities it has afforded me. For Brian and Hank and Tricia, the whole Sturgis family, they’re incredible people. This foundation and the chance to give back came at a point in my life where I needed an outlet and a way to focus my time on something more than ‘me’.”

Gillis and the board worked closely with Mary Quinn at Schweitzer Mountain Resort and, nine years ago, held the first 24 Hours for Schweitzer fundraiser event.

“Schweitzer has been really gracious in opening up their ski resort, their facilities, the food an beverage, the lifts being run all night,” said Gillis. “The staff was super energized.”

If you’ve never been to a 24 Hours for Schweitzer event, get ready. Imagine skiing for 24 hours straight. Sometimes I can’t even make it past lunch on powder days.

“After the first event, the quest for completing 200 laps began,” said Gillis.

Over the years, milestones were set and broken. On the third annual fundraiser, Gillis finally surpassed his 200-lap goal.

“I might be one of the most competitive people on earth,” said Gillis. “In most cases I would rather eat crow, kiss my sister or die rather than not winning.”

After 24 hours of straight skiing, with water-filled ski boots and a bruised, battered body, Gillis learned he has skied 202 laps, but more importantly, he raised $35,000 in doing so.

The 9th annual 24 Hours for Schweitzer event took place on March 24-25. This year, instead of focusing on the endurance aspect of the event, Gillis said the event has embraced the idea of team challenges.

“Every hour there was a new challenge,” said Gillis. “One was to shoot water balloons down No Joke. Another was to hit golf balls while in your ski boots through rings for points.”

“Over the years the money we have raised for cystinosis research has done absolute wonders for not only Henry, but for every single child who is plagued by this horrible disease,” said Gillis.

Gillis gave examples of how the fundraising has had a real impact on Hank. With the release of a slow-release drug, Hank and his family have gone from having to administer medication every 6 hours to every 12 hours. Also, instead of needing eye drops every hour on the hour in the past, Hank now has micro-wafer contact lenses that dissolve over the course of a week.

“Donations for this cause are making a significant difference,” said Gillis. “Our community does so much, it’s really something. It’s incredible to see the giving nature our community offers and they we support our own.”

If you would like to learn more about the 24 Hours for Hank foundation, check them out at www.24hoursforhank.org. The next fundraising event is Swing for a Cure on September 29. 2017 at StoneRidge Golf Club.