We, as humans, organize things neatly. We put labels on things, stick them in folders, put them in nice, tidy rows so we know where they came from, what they do and where they should be going. We know a lot about the animals of our world, and we put them into their own little boxes, too.

Then there’s the platypus. 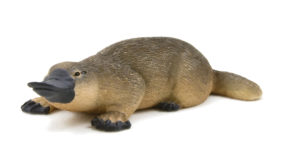 Where do you even start?!

A platypus is a furry mammal. It lays eggs, has a duck bill, a beaver tail, the feet of an otter and it’s also one of the only venomous mammals on Earth. Perhaps the weirdest thing about it is that it’s perfectly adapted for its environment.

There is this idea in evolutionary biology called convergent evolution, where unrelated species will adapt similar or identical traits when living in similar conditions for very long periods of time. Sharks and dolphins both have dorsal fins, for example, because it’s a hydrodynamic stabilizer (stops them from rolling in the water), but they are completely unrelated animals. Deer around the world are another good example.

Again, there is the platypus. Other animals live in similar conditions to the platypus, shallow wooded streams and ponds, and beavers are somewhat similar, but also very different.

Basically, nature does whatever in the heck nature wants to do, and if nature doesn’t want to go home because it’s drunk on platypus juice, nature isn’t going anywhere.

Let’s talk some more about the weirdness of the platypus. We’ll start with its name. Platypus is a Latin conversion of the Greek word: platupous. That’s just a fancy way of saying flat-footed, which it is. Though you’ve heard people call multiples “platypi”, this is actually incorrect. This is a Latinization of a Greek word. There is no defined pluralism for more than one platypus, but the most generally accepted are: platypuses, platypus, or platypodes if you want to get your Greek on.

If you’ve ever looked at a close-up image of a platypus’ feet, it looks like a cross between a Freddy Krueger nightmare and a duck foot. The webbing helps it be flexible and fast in the water, while the bony structure keeps it stable on land. There is a spur on the hind legs that is connected to a venom gland deeper in its body. The venom isn’t lethal to humans, but it sure does hurt!

As everyone knows, platypus have bills like a duck. It doesn’t quack, but this bill is actually pretty awesome. The platypus uses special sensors in its bill to detect electrical fields through water that are emitted when the platypus’ prey moves its muscles.

We use a similar electrical sensor for the SawStop. That’s an addition to a tablesaw that is equipped to an electrical sensor and a rigging that moves the sawblade. Flesh can hold an electrical charge, while wood can’t, so the split second flesh connects with the metal, the rigging pulls the blade down into the table and away from your finger. If you were wiggling your finger in the water, a platypus could locate it with that similar sensor, but at a distance.

The weirdness starts at birth. Or hatching. They’re one of the only mammals that lays eggs. All mammals have eggs, but most incubate at a cellular level inside of the mother. Platypodes do that for about a month, then plop out leathery eggs that incubate for another week and a half or so before the young hatch.

Could you imagine if humans did that? How different would our maternity wards be if we pooped out eggs after six months of gestation?

Another strange feature of the platypus is that it’s a carnivore without teeth. Ever see granny tear into a steak?

Unlike your granny, the platypus will shovel up gravel while it feeds, using the sharpened bits like makeshift teeth as it mashes its food in its mouth and cheek pouches. While the lack of teeth may be an evolutionary flaw in a list of oddball quirks, its ingenuity is certainly no mistake.

As far as mammals go, the platypus is definitely the odd man out. If it teaches us anything, it’s that all of our neat, tidy and orderly boxes sometimes can’t contain the strangeness of nature. Also, you learned how a SawStop works today, so that’s a bonus!