Let’s be Frank about the Earl-Y days: Part 3 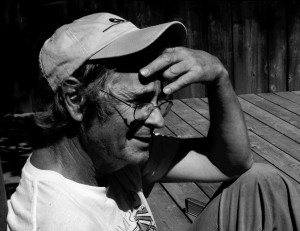 Ted Bowers takes a break on the job site. Photo by Ben Olson.

In this final article about the “Early” days, I thought I would talk about some of our more memorable jobs with Boles Construction.

The Oddfellows remodel: we got the original contract to convert this venerable landmark to the Head Start center. It involved creating a commercial quality kitchen, a large classroom, bathroom, and a second exit to meet code requirements. There was some interior framing to achieve this and a lot of drywall to hang, tape and finish, then paint. Jay and I were still novices at drywall and to be “frank,” Earl wasn’t much of a teacher.

We were of the school of “smear a lot on, then sand it down.” It seemed like the drywall went on forever and we were either covered with mud or working in a cloud of dust. We went a little crazy at times, flinging handfuls of drywall mud at each other to fight off the boredom. That part of the job, however, was a piece of cake compared to what was involved in creating the second exit. There was an old furnace room in the basement next to the classroom that had its own entrance from the street. The problem was that a 10” thick 80 year old concrete wall separated the rooms. Our job was to jackhammer a doorway through that wall.

Two days of bone shaking, ear shattering labor left us with ringing ears and fingers the size of bananas. I guess nobody had heard of concrete saws back then?

I’m The Jennestad bathroom remodel: Ole Jennestad, proprietor of the Jennestad Clothing store in downtown Sandpoint, was a key figure in the history of the area. He got his start in the clothing business in the 1930’s by providing the logging camps with clothing suppliesboots, pants, coats, etc. Being a tough, strong willed Norwegian, he began by skiing to the camps with a pack on his back full of these supplies. Eventually, he accumulated enough to start his store downtown and there is where I first met him. He was in his 80’s or even 90’s by then, still tall and straight. He was a dour old guy who seldom smiled and his sales philosophy was to stand and stare (glower, even) at you there while you browsed through the store.

His daughter worked in the store as well and she wasn’t much happier than Ole, so shopping there was a bit of an ordeal. When I found that we had gotten the job of providing his home with a downstairs bathroom, I was apprehensive about the atmosphere on the job, but it progressed smoothly and we seldom saw the Jennestads while we worked. Part of the project was to demo an old garage at the back of the house. Up in the attic I discovered an old pair of wooden cross country skis, the ones Ole delivered good to the loggers on decades ago. They were hugeover six feet long, and heavy. I thought of him slogging uphill on these skis with a heavy pack on his back and was able to imagine in a small way the amount of fortitude this old man hada humbling experience.

It was a privilege to have worked on these and many other remodels in Sandpoint. I’ve seen a lot of the town’s history, demoed some of it, and had a small hand in creating some as well.