DiaTribe: Thoughts on the nature of conformity and tribalism

If we could take Doc Emmett Brown’s DeLorean back in time — now I’m talking way back, back to the days of our hunter-gatherer ancestors — then we would witness firsthand the evolutionary history of our tribalistic nature.

Like other primates, our predecessors were more likely to survive and pass on their genes if they belonged to a group. Accordingly, the evolutionary selection process favored those who had a strong proclivity to belong. Unfortunately the desire to belong to a tribe appears to go hand in hand with another evolutionary adaptation: a hostility toward other tribes. 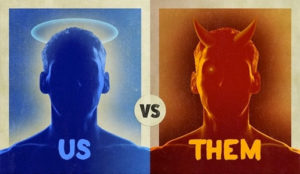 Sound familiar? It should. Because this is the double-edged sword of our evolutionary past. It may not always be a pretty sight, but it is through the prism of our ancestry that we can get a better glimpse and understanding of our own thoughts and actions.

Scroll to the comments section beneath any article regarding politics, and you will soon find yourself bombarded with narrow-minded attacks from partisans on every front – Obama is a communist, Trump is a Nazi and so on. They aren’t very concerned with truth telling, but instead act as shills for the party to which they belong. They typically grant amnesty to members of their own group for the same transgressions that they demonize the opposition for. Unbeknownst to them, these zealots are exhibiting many of the vestiges of our primitive forebears.

Sectarian hostility is not exclusive to any group, it is a fundamental characteristic of all groups (albeit it does not always manifest with the same level of aggression and closed-mindedness). That is because we are all the progeny of primates who — by necessity — banded together into highly interdependent groups, and developed a rugged in-group and out-group disposition.

Tribalism can be benign or malignant. In modern times, the out-group can be another nation, race, gender, class, sports team, political party, religion and virtually any other group that one does not belong to. When Turner Field fills with 30,000 fans — all dressed up in red and navy blue, and chanting and gesticulating the Tomahawk Chop in unison — it’s all just good clean fun.

Although this is a rather innocuous example of tribalism, it is this same “us-versus-them” tribal loyalty and group cohesiveness that can lead to large-scale atrocities. When fused with a herd mentality — where individuals have no capacity to think rationally and independently — a benign tribe can swiftly turn savage. Wars can be waged, members of opposing groups can be brutally tortured and massacred. Such is the case throughout human history.

Final summation: It’s okay to be a sports fan, just don’t become a soccer fan. I mean, Yikes! Those guys can get pretty passionate about their team.

“Hey, that guy isn’t singing ‘Ole Ole Ole’ with the rest of us. Tar and feather him!”

When an individual holds an opinion that is contrary to the consensus of his tribe, he is often shunned or ostracized. Being alone, without the protection of a group means that the individual is less likely to survive and pass on his DNA. Indeed, conformity and obedience are also beneficial adaptations. This explains why people have a such a strong propensity to adhere to the beliefs and customs of the group. This perhaps also explains why so few seem to have the courage to go against the grain of public opinion.

Identity politics is, of course, another form of tribalism. Whether this phenomenon is healthy or unhealthy depends on a few factors. Identity groups, like other social groups, tend to be exclusionary, not inclusionary. It is not uncommon for a group that protests injustice to turn a blind eye to the injustice another group faces. Moreover, a group that ostensibly opposes racism and discrimination will sometimes engage in similar behavior that its members protest against.

Some feminists, perhaps as a result of staring into Nietzsche’s abyss for too long, often end up with so much contempt for men that they inadvertently become much like the misogynists they hate. This is not an attack on feminism or any other particular identity group, but a caution against combative, unconscious and dogmatic tribalism, which inhibits us from thinking objectively and independently.

Being part of an identity group shouldn’t require that you assume the guilt or innocence of someone based on what identity group they belong to. Is the black man innocent? Is the police officer guilty? If you really want the answer to that question then you must learn to withhold your judgment until more evidence is gathered, and resist your tribal instinct to defend your own side (black lives, blues lives.) at all costs.

How dangerous an identity movement becomes depends on how much of a capacity the members of the group have to think for themselves. Without this capacity, it can easily spiral into a French Revolution-style mob mentality.

Some conservatives like to talk about identity politics as though it’s an exclusively liberal fetish (i.e. women, minorities, the poor). But no party has a monopoly on identity politics. Political parties simply pander to different identity groups — for conservatives it’s business owners, Christians, soldiers, policemen, the rich. This is the essence of politicking: appealing to certain demographic groups, and capitalizing on their tribal antipathy. The skilled, Machiavellian demagogue cunningly turns tribe against tribe, all the while proclaiming that we should all “come together and unite as one.”

Notwithstanding the often destructive outcome of our in-group / out-group psychology, to reduce our sense of belongingness to a pejorative “tribalism” would be a mistake. Rejecting our collectivist nature in favor of a more “rugged individualism” would doom our species to failure. Our survival depends on our willingness to work together with the other members of our community.

Tribalism has been, and continues to be, a fundamental characteristic of our species. We are highly social, highly interdependent beings. But we are also rational beings. And our survival depends not only on our willingness to collaborate with the tribe, but our ability to question and challenge the prevailing opinions of the tribe.

Because we all belong to tribes that can, more often than we care to admit, become red in tooth and claw.