If you’re flipping through the Reader over a bite to eat, I apologize in advance.

You’re probably about to lose your appetite.

7B is home to some pretty unconventional pets, from chickens and donkeys to rats and bearded dragons. How many people do you know that keep cockroaches as pets?

I’m guessing the answer is pretty darn close to zero. 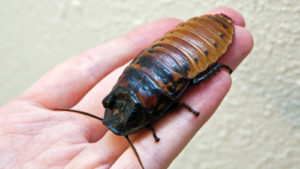 Cockroaches are relatives of termites, both members of the Blattodea order. In most cases, termites and cockroaches are both terrible, destructive and disease-spreading pests capable of becoming a full infestation in a matter of weeks.

In the natural world, cockroaches are kind of unsung heroes. They’re basically nature’s garbage men, taking the decomposing leaves and other stuff animals don’t want to eat and breaking it down so that plants can use the nutrients as a food source. However, several breeds such as the American Cockroach and the German Cockroach have proliferated as urban pests uniquely suited to thrive in human households. Their droppings, vital nutrients for bacteria, have no plants to feed in the human home and instead bolster the growth of harmful bacteria that can make humans sick. Their need for water sends cockroaches straight for our sinks and water heaters where they can contaminate our drinking water.

So, again, why would anyone keep these creatures as pets?

The Madagascar Hissing Cockroach is different from the home-invading pests dancing in our garbage. They prefer scavenging on the forest floor to dipping into your garbage disposal. While their ugly cousins can survive and thrive on tiny amounts of food, the Hissing Cockroach eats a lot. A family unit of Hissing Cockroaches can eat an entire carrot in a day.

Hissing Cockroaches are also wingless. That’s great, because they can easily get up to be three inches long.

They’re also armored better than their cousins, with a series of plates running down the length of their body like a six-legged tank. The males even have horns protruding from their prothorax. The males duel like bucks during mating season, clashing and hissing in some kind of Burtonesque horror show.

They don’t call them Hissing Cockroaches for nothing. Unique to insects, they’re capable of blowing air out of their respiratory organs (spiracles) near their rump. Most insects grind body parts or use special organs unrelated to respiration to hiss or make other noises (think: crickets), but the Hissing Cockroach hisses like we would, if our mouths were on our butts.

Aside from the size and the hissing, they’re also pretty unique in the roach world for how they rear families. German Cockroach nymphs are self-sustaining once they emerge from their ootheca (egg mass) and will go about their business tormenting humans with relatively little supervision. This is an evolutionary advantage for urban roaches; in the event the entire adult population is wiped out, a new generation can proliferate without intervention. Hissing Cockroach nymphs will actually stay near their mother for much of their growth, and the mother will care for them similarly to how bears will rear their cubs.

Repulsive as they might be, Hissing Cockroaches are kind of big shot movie stars. Due to their size, flightlessness and inability to breathe in cold weather, they’re easy to control and see on camera and have been in several major movies. Plus, they’re totally gross and spur a natural revulsion in audiences.

These disgusting features also make them popular for eating challenges. Any time you see someone forced into eating cockroaches on TV, they’re most likely being made to eat Hissing Cockroaches. There is an unseen challenge to eating these bugs, because they contain a neurotoxin that numbs the mouth and throat, eventually making it difficult to even swallow. Don’t worry, it’ll pass after a while and is only noticeable when eating several.

If owning a cockroach colony sounds exactly like the roach-shaped hole in your heart you’ve been silently yearning for, I have good news! They’re fairly easy to care for and pretty accessible to own as pets. I mean, I don’t have any phone numbers for you to call for a cockroach dealer or anything, but I have some tips for successful rearing.

A terrarium of almost any size will work, but you’ll want to make sure it has a snugly fitting mesh cover across the top. They climb better than almost any other insect, and escaping things is a roach’s schtick. They need lots of hiding places and things to climb on, heat and humidity. Don’t forget to give them a refillable water source and plenty of vegetables to eat. Like any other roach, they dislike light.

They’re perfectly safe to pick up and handle, though the hissing can be startling; they’ll stop doing that so much once they’re comfortable with you.

If you’re raising them as a pet, they can live up to five years, so take that into consideration. You’re in it for the long haul.

If you have other unique pets that eat insects, Hissing Cockroaches make for a good meal, and could potentially save you some money if you go into breeding them.