It’s the talk of the town. Even if you’re not an avid umbraphile, the eclipse has undoubtedly come up in a casual conversation more than once in the past month. And why shouldn’t it? We don’t get to see these very often! 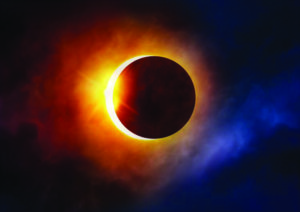 (By the way, the sun’s diameter is over three times the distance between Earth and the moon. Also, the sun is really hot. Also, if that were to ever happen, the sun’s gravity would tear the two bodies into stony confetti well before it baked the planet like a delicious potato.)

The moon has an inclined orbit, which means eclipses are pretty rare. Ones like this one that swing across over half the continental United States are even rarer. The last time the U.S. saw a total solar eclipse was in 1918.

Most eclipses have totality somewhere, but it’s exceedingly rare to see totality sweep across the continental United States like this.

Here in Sandpoint, we won’t get a view of totality, but we’ll get to see a partial eclipse. We’ll get to experience about 88-percent occultation (meaning the moon will be blocking about 88 percent of the sun from our view), which should give us a pretty wild experience. Day turning to night, dogs losing it, Aztec sacrifices and the like (let’s hold off on that last one, Sandpoint).

The eclipse will occur on Monday, Aug. 21. It will begin at 9:14 a.m. and reach its maximum occultation at 10:28 a.m., which means you’ll want to be looking east. Then again, if you’re having trouble finding the sun, I’m not sure what to tell you.

Now, the sun is a giant hydrogen fusion factory that’s spewing out photons and ultraviolet radiation like a stellar firehose, so staring at it is generally a pretty bad idea. Even while it’s partially covered, staring at the eclipse can permanently damage the retina of your eyes.

I know being told not to do something just makes you want to do it more, so we’ve got a failsafe.

We at the library are giving these out for as long as we have them. They make viewing the eclipse safe so that the eclipse isn’t the last thing you ever see. We only have a limited supply, so we can only give out one per person that visits the information desk. If you want to get some for your Aunt Sally, you’ll have to drag her in here, or we won’t be able to help! We’re not the only place giving these away. A quick google search of “free eclipse glasses” from any reputable website (as in, one that doesn’t ask for any personal information!) should yield some results in the event we run out before the eclipse.

If you plan on traveling, be prepared for some insane traffic. People are coming in from all over the world to view the eclipse, so be patient, be responsible, and be careful! Be sure to plan well for any scenario you might encounter.

Even basic things like being able to use the restroom could be difficult, depending on where you go (no pun intended).

According to the various cities, towns and parks along the path of totality, the demand for portable toilets has been “astronomical” (ha, get it? Because it’s an astrological event). Be sure to bring water with you wherever you go, because finding some among the throngs of viewers could be even more difficult than relieving yourself of it.

I wouldn’t doubt that any number of people are plotting viewing parties from some pretty prime real estate the day of the eclipse, too. Just ask around!

I hear whispers that Schweitzer Mountain will be hosting a viewing event the day of the eclipse.

If you don’t plan on traveling but want to prepare for the eclipse, there will be a program on the solar eclipse and other astronomical wonders with Jim Pletsch at Travers Park, Aug. 12, from 1-3 p.m.

The next total solar eclipse to pass through the United States will be primarily restricted to the East Coast on April 8, 2024. After that, the west side won’t get another one until Aug. 12, 2045. So don’t sleep in! Don’t miss the chance to witness something you can tell your kids about in 20 years!

Stay safe, and try not to sacrifice anything other than a pack of hot dogs to Quetzalcoatl.