Their upcoming play, “Secret Shame,” is no different. Writer and company co-founder Chris Herron said the show is about two middle-aged women with families who have been carrying on a secret lesbian affair for years. The crux of the story? It looks like the women’s secret is about to come out. 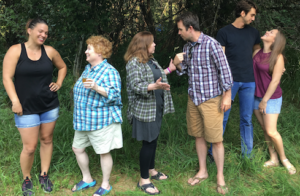 “It’s hopefully a comedy — but it’s only a comedy if people laugh,” he said.

The other half of the Unknown Locals and Herron’s wife, Madeline Elliot, said that while Herron’s original works touch on hard topics, the plays are meant to make those topics digestible.

“We’re going to tackle some deep subjects, but we’re going to make it funny and help people see things in a different way,” she said.

Elliot said that while Herron is “the creative genius,” she is the mind behind the directing and computer-based side of production. Though the Unknown Locals is technically made up only of Herron and Elliot, they said they have a cast of friends who are regularly involved with putting on shows.

“There are honorary members (of Unknown Locals) who we work with a lot,” Elliot said. “They’re all kind of like an extended family that we like to have involved in stuff because they’re wonderful.”

Some of these honorary members will be featured in the upcoming show, including Kate McAlister, Dorothy Prophet, Eric Bond, Nicole Buratto, Jeremiah Campbell and Alex Cope.

In the few years Elliot and Herron have been the Unknown Locals, they said there’s been a bit of a learning curve.

“A lot of it has been learning as we go,” Elliot said. “You learn all the things you didn’t do (for a show) and then you make a list: posters, programs, P.R., paperwork, banking, insurance, permits…”

“Stuff our creative brains don’t like thinking about,” Herron said with a laugh.

But through learning together and getting to build the Unknown Locals as a business, Elliot said she and Herron have been fortunate.

“We feel blessed in so many ways all the time,” Elliot said. “We found each other and we have a wonderful family and we get to do what we love and that’s more than most people can say.”

“This show is really relevant in a lot of ways. I think Sandpoint is a town that can get behind it,” she said. “Even though it’s about middle-aged women, I think it’s a story everybody needs to hear, and I hope we can reach out to young people.”