Jacquie Warda’s EXTRA 300 aerobatic monoplane is firetruck red, spangled with silver stars and branded with the phrase, “Ladies, it’s time to fly!” When you’re one of the top tier aerobatic pilots in the nation, flying in style is essential.

On July 24, Warda touched down in Sandpoint for a meet and greet with fellow aviation-enthusiasts, per the invitation of longtime friend and founder/manager of the North Idaho High School Aerospace Program (NIHSAP) Ken Larson. A devoted supporter of young aviators, Warda will visit with some members of NIHSAP, and even take some on aerobatic flights in Coeur d’Alene later in the week. 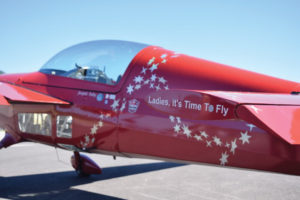 Contributors such as Warda play a key role in the resurgence of aviation in Sandpoint.

Some of Warda’s sponsors have donated resources to NIHSAP, and she has lectured the group via Skype on various topics, many of which stray from aviation itself toward the grander scheme of life.

Being one of those people herself, Warda knows these words ring true: Renown nationally for her ability as an aerobatic pilot, Warda invests time between airshows to act as a role model by speaking to kids, especially groups of young women.

Female role models such as Warda are invaluable to young female fliers such as Annie Slippy, a junior at Central Washington University majoring in aviation.

“I think women’s involvement in aviation is really important because I think a lot of people don’t know that it’s possible,” Slippy said. “Sometimes when I tell people that I’m studying aviation, they ask why, and I respond ‘Well, why not?’”

In one of her classes of about 40 people, Slippy said she could easily be one of only two girls. 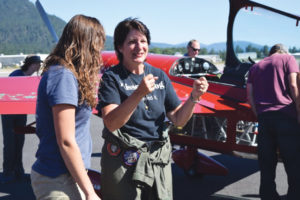 Jacquie Warda talks about how bumpy it was flying over the mountains with an aviation fan on Monday at the Sandpoint Airport. Photo by McCalee Cain.

“It’s really encouraging to see other women (like Warda) that have been where I am, and have struggled with the same things and know what’s happening,” she said.

While aviation is a traditionally, and to a degree, still male-dominated field, passionate female pilots like Slippy are pioneering a new era for aerospace: one brimming with career opportunities for women.

“I live for the moment of liftoff, right when you leave the ground and everything starts to change, and you get that third dimension,” Slippy said. “There are no words to describe the freedom of flying, really. It’s amazing.”

Thanks to passionate supporters such as Larson and Warda dedicated to getting young women into the air, opportunities in aviation abound for females in Sandpoint.

Larson’s NIHSAP is a collective nonprofit helping teens from the region explore the field of aerospace hands-on. Last year, the group tackled the project of building their own Zenith Zodiac CH601 XL Kit Airplane, and next year shall rebuild a vintage 1948 plane as well.

“(NIHSAP) isn’t just about flying, because we also look other aviation and aerospace careers,” Larson said. “We are trying to encourage women to get more into it, partly because a lot of it is engineering and mechanics, that has traditionally been male-dominated, and the opportunities are incredible right now.”