Editor’s Note: Brenden Bobby is out sick this week, so publisher Ben Olson is filling in with your weekly dose of Mad About Science.

One of my favorite activities in the summer is to lie in an open field and watch the clouds roll by. Have you ever really thought about how clouds are formed, what they are made of and what different types of clouds tell us about weather patterns? 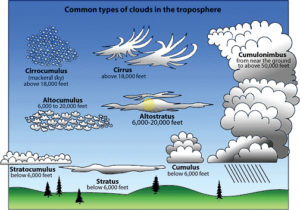 Put simply, clouds are made up of tiny water droplets and ice crystals that are so small they float in the air. Most of the time, we don’t notice the droplets because they are so small and loosely packed, they don’t form into a cloud. It’s only when the droplets become large enough and form together that we see what we identify as a cloud or fog.

Let’s go back to my 7th grade science class, when my teacher used a water glass to explain how clouds formed. Though the water in the glass looks static, the water molecules are constantly in motion. When the water is warmed, they move faster. When it’s cooled, the molecules move more slowly, even solidifying into ice if cooled enough.

When the water molecules move from the glass to the air, it’s called evaporation. If the glass is heated up, more and more will evaporate, becoming water vapor.

Evaporation is why our oceans are salty. Because rainwater is slightly acidic, when it falls over rocks on land, it breaks down the rock, creating ions or electrically charged atomic particles. These ions are carried away in runoff to streams and rivers and ultimately to the ocean. Two of the most prevalent ions in seawater are chloride and sodium – together they make up over 90 percent of all dissolved ions in the ocean. When seawater is evaporated, the ions are too heavy to travel with the water molecules, so they are left behind, creating the “salty” taste we associate with the sea.

After evaporation, some water molecules can’t remain as a vapor, so they cluster in the air to form tiny liquid droplets – a process called condensation. In clouds, the liquid droplets formed by condensation are small and light enough that they stay in the air. When they grow large enough, they will become heavier than the surrounding air and fall to the ground as precipitation.

You’ve seen condensation in many common forms: on your cold glass of lemonade outside on a hot summer day, on the inside of your windshield before you turn on the defogger or eyeglasses fogging up when you enter a warm building on a cold day.

Imagine the warmed molecules drifting up into the air. As they move higher, the air surrounding them is cooler, so the molecules clump together and form clouds. Voila!

The British pharmacist and chemist Luke Howard first devised a classification system for clouds in 1803. The system has proven so successful, meteorologists have used it ever since, with only minor modifications.

According to Howard’s system, clouds are given Latin names corresponding to their shape or appearance – layered or convective – and their altitude. Clouds are also categorized based on whether or not they are precipitating.

Layered clouds are much wider than they are tall. They will usually have flat bases and tops and can extend from horizon to horizon. The Latin term “stratus” or “layer” describes the layered cloud category.

Convective clouds, on the other hand, are taller than they are wide. These clouds look lumpy and piled up, like a cauliflower. Convective clouds are indicated by the root term “cumulo,” which means “heap” in Latin.

Clouds are also classified by their altitude and ability to create precipitation. Those clouds that are high in altitude, composed of wispy ice crystals are referred to as “cirro” which means “curl.” Clouds in the middle of the troposphere that are below high cirro-type clouds are referred to as “alto” or “high.” The prefix or suffic “nimbus” (“rain”) denotes a cloud that is causing precipitation.

You can often use your information on cloud types to accurately predict the weather. When you see cirrus clouds, it’s generally an indication of fair weather in the immediate future. Cirrocumulus tend to be large groupings of white streaks sometimes neatly aligned. These clouds are sometimes referred to as “herringbone” pattern, or as a “mackerel sky.” In most climates, these clouds mean fair weather for the near future.

Cirrostratus, on the other hand, tend to be more sheet-like than wispy, and often cover the whole sky. Their presence usually indicates moist weather within the next 12-24 hours.

Alto, or middle clouds, often block sunlight and form from 6,500 to 23,000 feet. Altostratus are gray and blue clouds that cover the whole sky, indicating a storm at some point in the near future. Altocumulus are grayish-white clouds that blanket the entire sky. These types tend to look like large, fluffy sheets. If you see them in the morning, prepare for a thunderstorm in the afternoon.

Stratus clouds are low-lying solid clouds that look like an elevated fog, often bringing drizzle or light snow. Stratocumulus are low-lying, bumpy and gray clouds that don’t bring precipitation. These do not cover the entire sky, but tend to arrive in rows and patches. Nimbostratus is a standard rain cloud – a large flat sheet of gray with small differentiation.

Cumulus clouds are the ones referred to as “white cotton balls.” When these clouds remain low clumps, there will be fair weather, but when they start to ascend higher, a large storm could be forming. Cumulonimbus are cumulus clouds that have grown vertically into an anvil-like shape. The anvil tends to point in the direction the storm is moving. These clouds bring the most dangerous weather, such as rain, lightning, hail and tornadoes.

Now that you know more about clouds, go outside and take a look. Try to predict the weather based on the clouds you see, then check your predictions the following day.