The search is over — we found a ‘squatch in them there woods!

Well, we would have, but we were about 1,000 centuries late to the party, but our great-to-the-seven-thousandth grandpappy may have seen one around the time he and his friends were just learning how to extinctify neanderthals with tools. 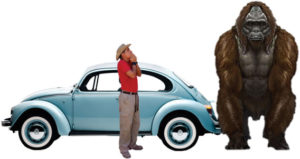 At the time, it was highly unlikely our good ol’ grandpappy called it a sasquatch. He probably called it something like: “HNNNnnfghhhRRR!”

Gigantopithecus was perhaps the largest ape to ever exist. It’s possible that it stood anywhere between 6.8 and 9.8 feet tall and possibly weighed well over 1,000 pounds. If you put gigantopithecus into a sumo ring with a world champion sumo wrestler, he could probably spin the poor guy around by the mawashi (the belt/loincloth thing they wear) on one finger like a Harlem Globetrotter spins a basketball.

See, even when I make ridiculous comparisons, you still learn stuff, like what a sumo wears. Because if you’re ever stuck in the wilderness with no food or water, you’ll be glad you knew what a mawashi was.

While you’d think we’d have found these creatures’ remains at Skull Island, we’ve actually found most of their bones (primarily teeth and mandibles) in southeast Asia, namely China. In fact, gigantopithecus teeth were first discovered when they were recovered from Chinese medicine shops, and it was discovered they were used pretty extensively in the practice. To date, we’ve found over 1,300 gigantopithecus teeth, so despite the fact that they’re now extinct, they must have been doing pretty well for themselves for a while.

They likely looked like giant orangutans based on their skeletal structure, but whether or not they had that gorgeous Ed Sheeran hair is anyone’s guess. Being fossilized, we don’t have a lot of data on what color they may have been, the same dilemma we have with just about every dinosaur ever.

All of those fanciful dinosaur pictures you see in books, kids? They’re a lie. Unless you’re Bran Stark, we have no idea what color they were.

As I mentioned before, gigantopithecus lived alongside our ancestors for a while. We know that it existed for at least a million years, and we can trace a time when it existed alongside Homo sapiens and Homo erectus. Bigfoot jokes aside, that doesn’t make gigantopithecus the missing link, as it’s not really related to us; instead Gigz is closely related to the orangutan.

Giga’s teeth were pretty unique for an ape. Unlike humans or gorillas, Gigz had no sharpened incisors or canines for slashing through meat or leaves, it had very big, very hard and very tough teeth used for gnashing and grinding, much like a giant panda. This is because gigantopithecus very likely shared the same diet of bamboo as the giant panda. Interestingly enough, scientists have been able to differentiate older Giga teeth from newer ones, and made a connection of a changing climate between them.

Near the end of Gigz’ evolutionary tree, Earth’s climates were changing again. Bamboo forests were shrinking for some reason, and its diet had to change to sugary and acidic fruits, which caused cavities and pitting in its teeth.

Now, before you claim I just accidentally made some misstep in speaking about climate change, you have to keep in mind that a million years is a very long time. It’s not unheard of to see average global temperatures fluctuate up to 15 degrees Celsius over a million years. It’s not normal to see the fluctuations we’ve seen in half a human lifetime. Our planet, and our species is equipped to adapt when it happens over time, not when it happens all at once. It’s like driving a really nice sports car. You put your foot to the floor and make that 750 horsepower kitten purr. Then, suddenly, your nice paved road turns into a gravel road and you just became a stuntman in a Michael Bay movie.

I digress! I was talking about an ape!

The weirdest thing about gigantopithecus wasn’t even really about gigantopithecus. It was about what would steal its bones after it died. Apparently, during the same million year window of time that Giga lived and died, giant porcupines also lived and died, and they had a serious calcium deficiency. To solve this, they would steal bones left laying around, give ‘em a quick chomp and then carry on their merry way. While this isn’t unusual behavior in the animal kingdom, it is pretty odd that it happened fairly exclusively to one species.

Aside from this article being a grammatical sports car wreck of comical proportions, I really do hope you learned something today.

One of my favorite sections at the library is the biology section, especially prehistoric biology. Past that, you have probably guessed by now that I also like to flip annoyingly through the encyclopedia on my way to and fro.

Weirdness awaits, 7B! Go and find it!