Few things inspire us more than ancient architecture. The mystique of medieval castles comes from their complexity, built during a time when humans were considered to be simple creatures. Structures that seem random and decorative to us today actually served important military purposes when they were built, and the genius behind their design may cause you to rethink the idea that the denizens of the Dark Ages were dimwitted dingbats.

What is a castle? It’s a house for a king or a lord. These individuals amassed a large amount of wealth (primarily through slave labor), and they wanted a place to store all of this wealth away from Vikings and other invaders. The most economic way to do this was to store it all in a wooden structure, but then you ran the risk of it being burned down. What natural building material wouldn’t easily catch fire? 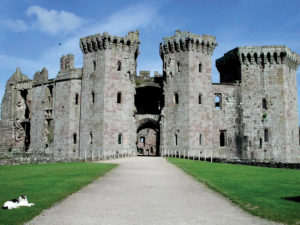 Everything about a castle is designed with defensibility in mind. Most castles were built on hills or steep artificial mounds of dirt. This would slow attackers as they tried to scale the hill while having arrows shot at them, and wear them out before they could even get to the walls. This hill was called a motte. In the process of getting all of that dirt mounded up, the builders would usually leave behind a ring-like pit at the base of a motte, fittingly dubbed a moat. Sometimes moats would be filled with water, sometimes they wouldn’t, and sometimes defenders would put wooden spikes or wicked defenses into them.

Until the 16th century, many castles had gatehouses or barbicans. Two towers would flank a gate and give way to a courtyard before you got to the actual castle gate. If an invading army were to break through the gatehouse, their soldiers would have to cross a courtyard while being pelted from all sides by arrows. Gunpowder and cannons trivialized gatehouses, because you could just blow through a wall and skip the courtyard altogether, but the practice of building imposing barbicans became a staple of elite English architecture.

When you think of a castle, you probably imagine a large wall with square ridges. These ridges are called battlements or crenellations, while the gaps are called embrasures. Archers would take cover behind the battlements, then pop out to aim and fire from the embrasures. Modern militaries still use cover in a similar manner. Between the 12th and 16th centuries, you had to lobby your ruler for a license if you wanted to add battlements to one of your buildings. This could have been a way to stifle revolts from lords of questionable repute and loyalty.

The keep was generally where the lord and his staff lived. It was the core of a castle, and capable of halting a siege if invaders breached the walls. The benefit of a keep was to force close-quarters fighting, and despite being such a large building, most keeps were built with corridors where men could hardly travel two abreast. This may seem like backward logic if you’re trying to get through your keep during daily duties, but it makes sense when you imagine your enemies trying to do the same. Within your keep, you can’t be flanked, and with your back to the wall you’re likely to fight even harder. If you’re fighting one knight at a time, your chance of survival increases exponentially.

Most castles would have dungeons (from the French donjon, which looks really funny when it’s written). This was the place no one wanted to end up. The Geneva Convention wasn’t exactly a thing in the Middle Ages, and if you were to torture a prisoner for information, no one would call you on it for fear of suffering the same fate. It was also a handy storage place to keep another lord if you wanted to ransom him off to his family or strike a truce with someone else. These were usually underground or at the top of a tower, which made escape and sanitation equally impossible.

One cool feature later castles had that no one talks about is the machicolation. When you see a castle with a tower that billows out, almost like a mushroom cap, you probably don’t notice that there are large holes on the bottom of the “cap.” This allowed defenders to look straight down, fire arrows, drop boulders or pour searing oil directly onto attackers without damaging the castle. Gates had similar gaps in them, aptly named murder holes, which could also be a sweet band name.

Castles served multiple purposes in their day. They were homes, warehouses, barracks and military bases. Castle architecture went on to inspire features for our own homes in the centuries that followed. Did you know bay windows originate from castles? In castle architecture, they were called oriel windows, and likely gave lords (or archers) a unique perspective of the bailey, or courtyard, without being viewed themselves. Oriel windows are a major part of Islamic architecture; I wouldn’t be surprised if Europeans adopted the idea for their own castles after the Crusades.

The next time you peer out your bay window for morning coffee, imagine yourself the lord of your keep, watching diligently over your bailey.

Now if only you could throw that rogue goose in the dungeon for pooping all over your faithful ‘67 Mustang.