Ice skates and hockey sticks collecting dust in the garages of North Idaho could have a new life thanks to efforts in Clark Fork to build an ice rink for the school and community.

Clark Fork High School teachers KC MacDonald and Kyle Olmstead are leading the charge for the project, which is drawing on donations of skates, hockey gear and money to give students and community members a new winter activity. 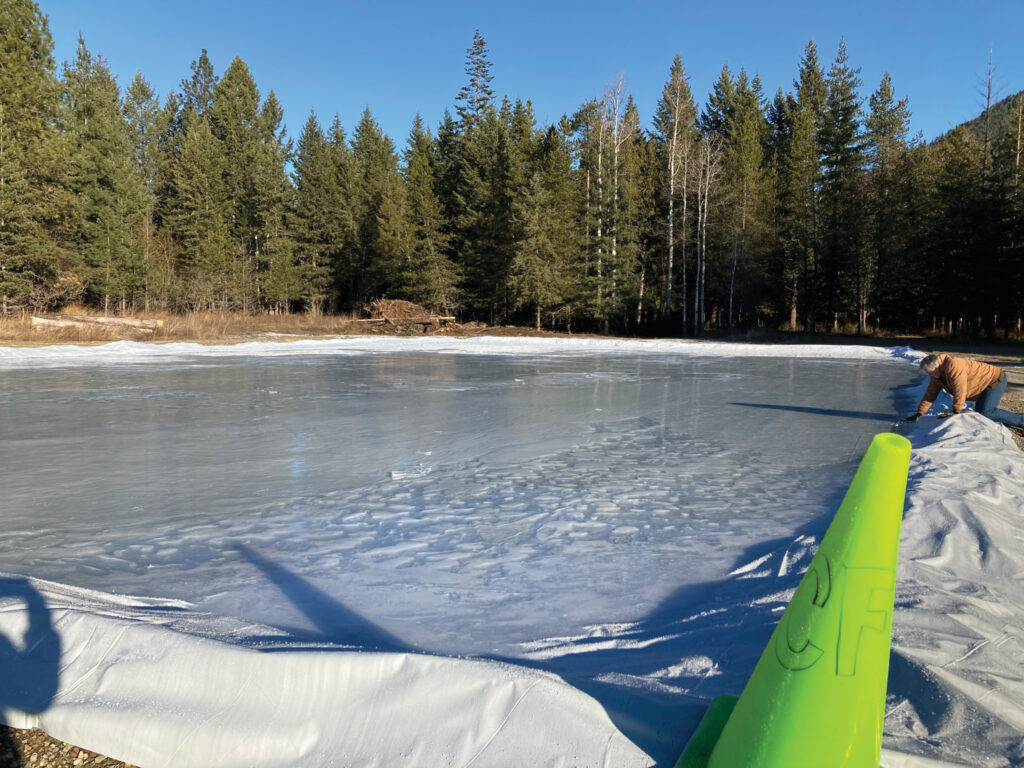 MacDonald lived and taught in Alaska before coming to Idaho in the early 2000s, and said he’s been asking CFHS Principal Phil Kemink for 15 years to make an ice rink happen.

“This year, for some reason, it went to the top,” he said.

After getting the green light from administrators, MacDonald looked into buying a large tarp on top of which the homemade ice rink would be installed. Thanks to community donations, he was able to purchase one from Minnesota for $1,000. The tarp is now laid out near the CFHS football field, located behind the school on Stephen Street.

With the tarp in place and winter well on its way, Clark Fork’s ice rink needed one more major component: water. With the help of Clark Fork Mayor Russell Schenck and approval from the City Council, the school is partnering with the Clark Fork Fire Department to deposit thousands of gallons of water onto the tarp in the coming months.

MacDonald and Olmstead envision the rink as a hub for kids willing to try their hand at a perhaps unfamiliar sport, and possibly as a home for an after-school hockey program.

“We just want the kids to learn how to skate,” MacDonald said, “and what better way than when you’re chasing a puck?”

Olmstead said he remembers “skating late into the night with friends” in high school, and wants to create those same opportunities for his students.

“Why shouldn’t our kids have the same opportunity to create those fond memories as well?” he said. “I think this is just the right medicine for our current climate.”

Speaking of climate — the literal kind — the Clark Fork ice rink will depend on some seriously chilly stretches of weather to create a skatable surface. MacDonald said that despite the reliance on Mother Nature, the ice rink is here to stay.

“Every year that we can do this, we will,” he said.

Once the shiny rink is ready to be christened with the blades of learners and skating veterans alike, maintenance will be a responsibility the school is ready to take on — with the help of students in the CFHS fabrication class as they create a makeshift Zamboni.

“I brought in my old riding lawn mower and they are stripping it down, going to repaint it, the whole nine yards,” MacDonald said. “[They’re] putting LED lights on it — just making it cool as heck. Then they’ll put a tank on the back for water, and that’s how we’ll hot mop [the ice rink].”

Long in the making and now hopefully a reality once colder days are here to stay, the Clark Fork ice rink is undoubtedly a full community effort.

“This year, everytime we had contact with anyone about getting this ice rink started, they were just as excited as we were,” Olmstead said. “Our district administration, Clark Fork Booster Club, fellow CFHS staff, city managers, the mayor and many others, have all thrown in an incredible amount of assistance to help [make] this dream a reality. To all of you — thank you.”