It’s harvest season, and America’s favorite red fruit is arriving en masse to a produce department and farmer’s market near you.

You know what they say: “American as apple pie.” 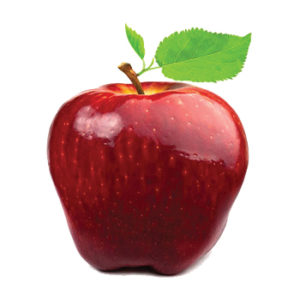 Surprisingly, that’s an incredibly misleading statement, because apples, pie and especially apple pie aren’t American… But they kind of are.

Apples originate from a tree in Asia, Malus sieversii, which still grows to this day in the wild; from there, they were bred, grafted and traded to European countries where they rapidly evolved into an unrecognizable (and delicious) fruit.

We believe that pies were first made by the Greeks, the progenitors of modern democracy.

Historians have found an apple pie recipe from Europe originating in the 1300s, oddly requesting figs as a filler.

So, how exactly is apple pie American?

Americans take things and change them into new forms, sometimes leaving them unrecognizable, but usually better in the process.

We took apple pie from relative obscurity, changed the filling, took out the figs and morphed it into a worldwide phenomenon, just like we did with apples (think: Honeycrisp, Pink Lady and Red Delicious), and of course, democracy (um, hello, 1776 is calling.).

Now that I’ve got you all jacked up and inspired talking about an obscure link between American liberty and lethal amounts of sugar, let’s talk about apples!

The Red Delicious is the most iconic apple in all the western hemisphere. It’s the apple you see on a teacher’s desk.

Ironically, after so many generations of breeding it for shelf-life and looks, we bred all the flavor out of it!

Red Delicious apples are real workhorses, and legend has it the original tree was thought to be a nuisance and was cut down twice, only to regrow a third time and birth the legendary fruit. It’s a shame the legendary fruit doesn’t taste so good anymore.

Fuji apples have a fun story behind them, too. These are one of the most common types of very sweet apples found at the grocery store, now. They were developed in Japan in the 1930s from two American breeds of apple: Red Delicious and the Virginia Ralls Janet. This was a really tense time for Japan and the United States, as the powers were expressing real animosity and friction toward one another in the lead-up to Pearl Harbor.

The Fuji apple best represents the reconstruction, the two countries coming together and sharing a literal fruit of their labors, and the world was a better place for it in the end!

Honeycrisp apples are a favorite of the northern and northwestern states. It was bred in Minnesota, land of the everything-is-frozen, and it was designed to be very cold resistant. It turns out Minnesota wasn’t the only state that loved the Honeycrisp, and it migrated west. Several farms in Washington bring delicious Honeycrisp apples to Sandpoint every year.

In my opinion, Honeycrisp apples make some of the best cider money can buy, since it’s a little bit sweet, a little bit tart, and it’s a pretty big apple.

Try buying them out of season and it’ll lighten your wallet real fast, though! I’ve seen them go for $7 a pound in the middle of summer. Oo-ie!

Granny Smith is another iconic apple. It’s about as green as it gets, and is one of the most tart apples available. The Granny Smith is an Australian apple, started on the farm of Maria Ann Smith. Story is, she found a sapling where she would dump her crab apples, and it would grow up to give apples that were perpetually green.

Due to the tartness of Granny Smith apples, they’re a popular apple when making cider to balance the sweetness out. They’re also incredible in apple pies- Just don’t forget to add sugar!

Of all the apples we claim as our own, and ones we borrow from other countries, there is only one apple native to America, and that’s the crabapple.

Truth be told, I couldn’t find much more information than that, I’m guessing because we don’t often use it for mass consumption!

I have a crab apple tree, and it makes some of the most foul-tasting apples I’ve ever eaten until I throw them into a crust and bake them.

Apples, like peaches, are in the same family as roses. I imagine they’re more closely related to the little pink and white wild roses we find blooming around here than the cultivated variety in our gardens.

It surprised me to know that China produced more apples than … well, pretty much the rest of the world combined. As few as three years ago, China produced at least 37 million tons of apples, while the US, the next biggest producer, produced around 4 million tons. That’s an immense gulf of difference, yet no one says “as Chinese as apple pie!”

I hope you learned something, today! And if you didn’t, I hope you at least had a nice mug of cider.