Ask anyone who lives in North Idaho what the most important environmental asset is and nine out of 10 will likely say Lake Pend Oreille. Watching out for our favorite body of water is the Lake Pend Oreille Waterkeeper, which for 10 years has promoted a science-based, data-driven approach to improving water quality. 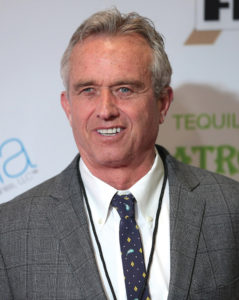 To celebrate a decade of service to the community, LPOW presents the Water Summit: “Discovering the Unseen — Exploring Our Waters’ Tiniest Organisms and Biggest Influencers” on Friday, Sept. 20 from 6-9 p.m. at the Panida Theater in Sandpoint. The event features five speakers who will discuss innovative technology and scientific breakthroughs that influence water quality, as well as keynote speaker Robert F. Kennedy, Jr. The environmental attorney, author, activist, clean technology entrepreneur and president of Waterkeeper Alliance is also the son of late-Attorney General Robert F. Kennedy and nephew of late-U.S. President John F. Kennedy.

Often credited with the birth of the virtual reality field, speaker Tom Zimmerman has more than 60 patents on everything from wireless communications to biometrics devices. Zimmerman will speak about his current project developing AI-powered microscopes to monitor plankton in their natural environment.

Jonathon Eisen is a professor at U.C. Davis who will be speaking about his research focusing on mechanisms underlying the origin of novelty (how new processes and functions originate). Eisen will also explain what microbes are and why scientists study them.

Researcher Orianna Bretschger focuses on understanding the metabolism and electron transfer mechanisms within mixed microbial communities, with the goal of applying this knowledge to biotechnology development. Bretschager’s talk will focus on an exciting new wastewater treatment system that could eliminate methane production.

Lisa Zeigler Allen is an assistant professor in the Microbial and Environmental Genomics Department at the J. Craig Venter Institute in San Diego. Allen’s research is directed toward understanding microbial and viral interactions in the marine environment through large-scale metagenomic, single cell/virion genomic and cultivation based approaches.

Johnny Mojica is research lead at Earth Economics, as well as an adventurer whose drive has led him to travel the world with a backpack from northern volcanoes to scuba diving in the Red Sea. Mojica will focus on the process of how to calculate a monetary value to natural resources to show what economic impact they have on a particular region.

Finally, Kennedy’s keynote address will be “inspiring and educational,” according to LPOW Executive Director Shannon Williamson.

“He gives a hell of a talk,” Williamson said. “We reached out with an invitation with no expectations that he would accept — he’s busy and doesn’t do these types of things very often — but I was blown away when he accepted.”

Tickets to the event are $35 per person and available at the Panida Theater or online at lakependoreillewaterkeeper.org.

In addition to the Water Summit, LPOW will host two other events giving more exclusive access to the speakers. On Friday, Sept. 20 from 3:30-5 p.m. there will be a meet and greet with the five speakers and Kennedy. Tickets for this event will be limited to 30 people, and beverages and light appetizers will be provided. Tickets are $100 per person while seats are available.

On Sat. Sept. 21 from 10 a.m.-12 p.m., there will be a panel discussion with the five speakers over brunch at The Heartwood Center in Sandpoint, allowing for the opportunity for attendees to ask questions about their presentations. Tickets are $30 per person, with seating limited to 60 people. All three events are available for $150 per person, limited to 30 people. Anyone interested in volunteering, please email [email protected]