The world lost an incredible mind on Feb. 28. Dr. Freeman Dyson was a theoretical physicist with incredible ideas. While most articles would recap his life, career and various accolades, I would rather explore an awesome thought experiment he put into the world. The man lived to be 96 years old, and the library has several books by and about him, so if you’re curious about his life, go ask your friendly neighborhood librarian. 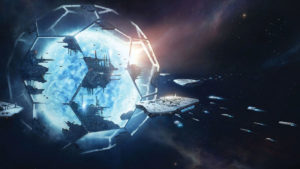 What I’m most interested in is the Dyson sphere — a theoretical construct that would encircle a star and harvest all of the energy it pumps into the universe for use in agriculture, industry and science.

Imagine for a moment if humans were to construct a spherical wall around the sun a few hundred thousand miles past Earth’s orbit. This is an immense amount of surface area that could be lined with photovoltaic panels that harvest the light energy emitted by the sun, then funnel it into factories that are used to build more panels that could be used to capture the energy of other stars.

If the entire area within the Dyson sphere were enclosed, it would capture a tremendous amount of heat, as there would be no atmospheric buffer to insulate the paneling from the sun’s radiation. Did you know that the surface of the International Space Station can get up to 250 degrees Fahrenheit on the sunny side? A structure large enough to encircle the sun — even outside of Earth’s orbit — would keep all of that heat trapped inside, unless it were to be vented into space.

While that wouldn’t bode well for Earth, it could be used beneficially on another star that isn’t supporting life. “Free” heat at that level could be used to boil water, turning it into steam pumped through turbines, cranking them to generate usable energy. This is a practice we already use on Earth to generate power in coal and nuclear power plants.

Another form of energy generation theoretically possible with a Dyson sphere could be accomplished by harnessing the host star’s gravitational field using a network of rotating panels that link together like gears. As the bodies orbit the sun, they move against one another to crank a turbine and generate energy, as an example.

Dyson himself stated that building an encompassing shell around a star would be wildly impractical. The amount of refined materials required to create a shell that doesn’t let heat escape would require materials to be harvested and imported from other solar systems, which has the potential to consume more energy than it would ever harvest. Instead, he believed it was more likely that a species advanced enough to build such a thing would use a wide, loose web of networked satellites that still have immense surface area, but allow some heat and light to escape the star — and have the added benefit of not broiling the homeworld like grandma’s brisket.

These networks come in a few distinct designs that aren’t considered true Dyson spheres. The first is a network that circles a star like a hula hoop — what is called a Dyson ring. A ring is the most likely starting point for an advanced civilization that is just beginning construction of a megastructure like this, as it wouldn’t capture all of the star’s energy, but would be able to supply the energy required to build more rings. A network of rings forming a spherical shape around a star is called a Dyson swarm, as light and heat are still able to escape the structure. The configuration of satellites could be in any number of possibilities that we haven’t even imagined yet, but these would be the most logical steps for humans to start with based on our current understanding of orbital science and astrophysics.

The idea of Dyson spheres has been adopted by the Search for Extraterrestrial Intelligence, or SETI, as any sufficiently advanced spacefaring civilization would require ludicrous amounts of energy production to travel between stars. The two logical sources of this much energy would be portable fusion engines, which require lots of external energy to create, or the simple and sustainable idea of harvesting energy from the sun. A structure like this would block a considerable amount of light from leaving the star, but the structure would also be emitting massive amounts of infrared radiation, which would theoretically make finding advanced spacefaring civilizations pretty easy to spot in the grand scheme of things.

This theory popped up in the news in 2015, when puzzled astronomers spotted a star with an irregular luminescence. It would dim and brighten intermittently, which meant something was passing in front of it to block our view.

The intermittent nature of this dimming led news outlets to postulate about the possibility of a Dyson swarm encircling the star. While this hypothesis has been debunked, it hasn’t stopped scientists from looking for similar phenomena, and a second star with an irregular brightness has been found in the years since.

If you’re perturbed by my drift into the fantastical realm of science fiction this week, I’d like to point out that only 15 years ago, the idea of your phone accessing the entire compendium of human history and knowledge with the flick of your finger was considered science fiction.