May the Fourth be with you!

Ever since you first saw Obi-Wan and Darth Vader cross lightsabers, you knew you wanted one, but you’ve been told your entire life that we just don’t have the technology for it, and by the time we do, melee weapons would be long obsolete anyway. So why worry about it?

Because it’s an elegant weapon for a more civilized age. 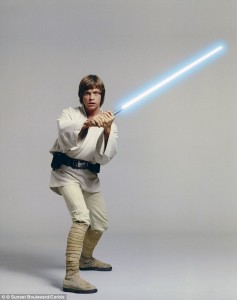 What exactly is a lightsaber? Does my cat’s laser pointer work the same way? Not even close! Lightsabers have a misleading name. They aren’t actually lasers, which is just a beam of focused light. A lightsaber is actually a plasma, or a superheated set of atoms that have been injected with so much thermal energy that their electrons have been stripped away. In this respect, the blade of a lightsaber is more like a weaponized sun.

Weaponizing plasma brings about another unique challenge. How do you unleash it without chaos and devastation spraying in all directions like some sort of demonic fire hose? The handle would have to create intense magnetic fields that stabilize the plasma into the classic sword shape. This would require a remarkable amount of energy to power it long enough for melee combat, the kind of power we can’t pack into a handheld battery yet.

As you can imagine, the plasma would have to be extremely hot to cut through matter. Wielding that in your hand probably isn’t the safest thing you could be doing when caught in a duel to the death, as it would also be discharging immense amounts of heat and wreaking havoc on the air surrounding it for up to several meters. You know how hot your entire kitchen can get when cooking a meal at 350 degrees? The blade of the lightsaber would be close to a balmy 10,000 degrees Fahrenheit.

Unfortunately, until we learn to safely wield the sun in a manner that will murder our enemies without incinerating us in the process, we won’t be buttering our toast with lightcutlery, though I would love to toast my bread with one swift stroke.

In the meanwhile, why don’t we look into the past and learn a little more about the origins of the lightsaber?

As we all know, the lightsaber is modeled after a sword, something we’ve used for at least 5,000 years for protection and war, but the origins of this science fiction staple are rooted in familiar legend: The Tale of King Arthur. A blade wielded by only the select few with enough experience and honor that will undoubtedly go on to achieve a fantastic destiny. This is a direct reflection of King Arthur’s fabled blade: Excalibur. According to legend, all other blades would yield to Excalibur. That doesn’t mean that they would stop and wait for Excalibur to make a left turn, that means when Excalibur got tired of other swords, it would cut straight through them, as well as their owners, in a single stroke.

Though we established that the “light” portion of its name isn’t the weapon, just a byproduct of the plasma’s awesomeness, I’d like to cover another instance in which light was used in ancient war to create fire and destroy an enemy ship. It was called Archimedes’ Mirror, and it’s a highly controversial piece of history. Essentially, the renowned Greek mathematician, Archimedes, had several panels of polished glass set up during the Roman siege of Syracuse in 212 BC. He then proceeded to point them at the enemy fleet and begin lighting the ships aflame, effectively using the light from the sun as a weapon against the defenseless Romans. This probably looked a lot like the space portion of the Battle for Endor, when the Death Star was like “Pew pew pew!” and Admiral Ackbar was all like “It’s a trap!”

Several prolific scientists over the past thousand years have tried to replicate the results, though to no avail, at least at that scale.

The idea of using a polished glass to focus light to burn things has become synonymous with acts of mischief and cruelty, when small children would use magnifying glasses to sear ants into oblivion. There are even YouTube videos of a guy that found an old TV screen that he rigged to a custom wooden frame. He used it to focus sunlight into rays capable of melting copper (1,984 degrees F), which is intensely fun to watch.

While we wait for science or dead Bothans to deliver the plans for functional lightsabers to us, we’re just going to have to settle for buttering our toast, opening our letters and cutting our salami with far less interesting utensils. Until then, may the Force be with you!