Get out of the water: Oscar buzz films

In discussing his gut-wrenching 1972 film “The Last House on the Left,” director Wes Craven called horror films “boot camp for the psyche.” Had Craven lived to see 2017, I believe he would have reasserted his claim to the masses.

As a culture, we are not yet beyond the needed catharsis of horror films, particularly in the shared experience of being frightened together. When I saw “Get Out” last February, the theater was so packed that I had to sit near the front of the auditorium. No empty seats remained for “It,” and I heard tales of friends showing up only to be turned away by signs proclaiming shows were sold out.

Recently, I saw “The Shape of Water,” and the diversity of the audience shouted out the importance of the film. College kids were packed in next to elderly couples. The last time I can remember seeing so many seniors at a monster movie was when I saw “Bubba Ho-tep” in Las Vegas. No, it’s not just because I go to late shows. I’m a writer; I go to matinees as often as possible.

The closest Oscar contender of years past that I can compare “The Shape of Water” to is “Ed Wood.” The 1994 Tim Burton film only earned two Academy Award nominations but won both. Plenty of other awards from other organizations fell to the black and white movie about a Hollywood rebel. “Ed Wood” is a love letter to monster movies and to actor Bela Lugosi. “The Shape of Water” is a love letter to “The Creature from the Black Lagoon.” 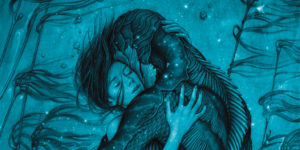 Artwork from “The Shape of Water.”

The Hollywood aspect comes into play early, as we see that two characters live in apartments above a movie theater. The theater owner even gives Elise, our heroine, free tickets. (I can’t help but be jealous of this situation. Having essentially grown up in a single-screen show house, these living accommodations appeal to me on a visceral, pre-memory level.)

The world of the film is populated with classic cinema tropes, too. Thankfully, many of them are used to more noble purposes than the stereotypes of old Hollywood. The gay best friend, the black cleaning woman/other best friend, the religious zealot/authority figure, and, of course, the misunderstood monster pulled from his home and tortured at the hands of man.

Many of these same tropes are used in “Get Out,” which was a much more complicated movie to experience. I was floored by both films but for different reasons. Yes, there are other movies up for best picture, but I would argue that the “Get Out”- “The Shape of Water” dynamic is most similar to last year’s “Moonlight”- “La La Land” situation. I can’t tell you how the Academy will vote, but I would predict that “The Shape of Water” is, despite its monster/horror trappings, a more traditional Oscar favorite.

Both of these movies are examples of Craven’s boot camp for the psyche. Whether they continue to garner praise from those who hand out statues remains to be seen. We might have to wait longer to see if they become films other artists respond to and address. For now, I am proud to see them gaining this recognition and will be happy when either wins best picture.

T.J. Tranchell is a freelance journalist and author in Moscow. His second book, “Asleep in the Nightmare Room,” contains more film criticism in addition to short stories. You can find his work at www.tjtranchell.com or go right to his books at amazon.com/author/tjtranchell.