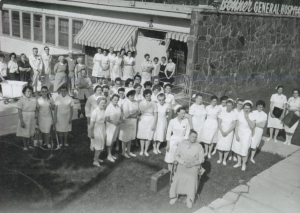 A photo of the BGH nurses in 1960. Photo courtesy BGH.

From humble beginnings as a refurbished military infirmary to its sprawling, modern medical campus, Bonner General Health has come a long way in 70 years.

BGH administrators and staff invite the community to celebrate seven decades of service at a celebration set for Saturday, July 13, from 12-3 p.m. It’s a chance to remember the history of the town while enjoying entertainment fit for the whole family. Among the attractions is illusion performances by Star the Magician, gift bags, music, cake and ice cream. Plus, one lucky attendee will be leaving with a cruiser bike, which will be given away during the celebration.

It’s fitting to put community at the center of the hospital’s 70th anniversary. After all, it defines Bonner General’s identity as a health care provider. According to BGH CEO Sheryl Rickard, it’s community partnerships that allow the hospital to remain independent and attuned to local needs.

“As I look toward the future, one of the most exciting and important goals for BGH is to continue working with community partners to improve the health of our community,” she said.

Rickard has seen the shape of local health care change significantly since she began her BGH career in the 1980s. In those days, the hospital relied primarily on in-patient services. Three decades later, 75% of hospital services are performed on an on-patient basis. The transition in service structure was a key factor in the decision to rebrand the hospital as Bonner General Health.

“We also wanted our name to reflect that we are committed to improving the health of our community,” staffers explain on the hospital website.

It’s a world of difference from the hospital’s earliest days. While other medical facilities pre-date Bonner General Health, it was the hospital that ultimately grew with the town, starting with its official incorporation on July 12, 1949.

Achieving incorporation was no small task. Early efforts to fund the hospital through a tax bond failed at the ballot box. After much work, the hospital board was able to purchase an old military infirmary from Farragut Naval Training Station. The only problem was transporting the facility to Sandpoint. The solution? Workers carved the infirmary into pieces and barged them one by one across Lake Pend Oreille, where the building was fitted back together like a jigsaw puzzle. 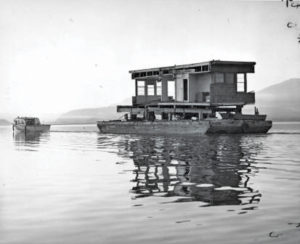 The original hospital building being barged up in chunks from Farragut in 1949.

The first Bonner General Health facility lasted for decades before it was replaced. Altogether, the hospital has undergone six major expansions, additions or renovations, starting in 1972 and continuing in 1978, 1988, 1998, 2000 and 2015.

The most recent project saw the construction of the Health Services Building, which is linked to the main hospital building by a sky bridge. The new building established office space for Sandpoint Women’s Health, the Wound Care Center, an anticoagulation clinic and Performance Therapy Services, as well as the hospital’s human resources, patient financial services, accounting and IT departments. In turn, the additional space in the original building boosted the hospital’s core services.

Seven decades is no small achievement for any institution. And hospital officials are looking forward to marking the occasion with the people that made it happen: the Sandpoint community.

“The 70th anniversary of BGH is a great time to reflect on the people who made BGH what it is today, from our founding fathers to today’s healthcare team of dedicated and talented staff, skilled physicians and generous volunteers,” Rickard said.