A match made in Sandpoint

How a small local company set the match business on fire

According to an article in a 1917 issue of the Pend d’Oreille Review, the history of the match industry “reads like a romance.” Match factory workers of the mid-1800s afflicted with “phossy jaw” and victims of the other disasters of the white phosphorus match production period would probably disagree, but that’s another story. For the North American timbermen with endless resources at their disposal and a booming market for the new “safety matches,” romance was in the air.

The transition from white to the safer red phosphorus match heads snuffed out the large-scale health emergencies and fires that had plagued the industry, but it wasn’t until Diamond Match Company opened its patent for the first non-poisonous match in 1911, at the urging of President William Howard Taft, that matches became a trusted household convenience for even the most cautious. 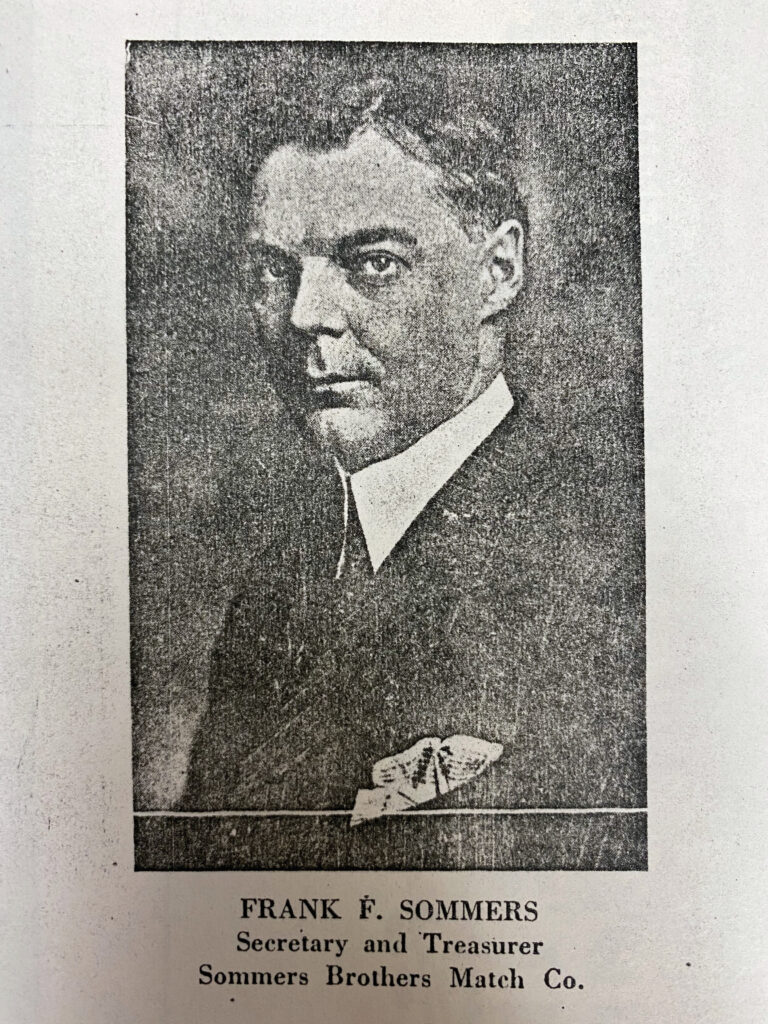 At this point, match production, which was already a steady industry in the United States, really boomed. With dozens of mills and factories around the country, Diamond had a firm grasp on the industry. The company operated a huge mill in Priest River and one near Newport (Diamond Lake is named after the company). But a trio of brothers were about to give them a run for their money.

Charles, Sylvester and Frank Sommers had each begun working at different match companies as boys (Frank at age 9), and in 1903 they joined to buy a deserted factory building in Saginaw, Mich. Frank, the business genius, invented the “double dip” match in 1904, which was so reliable and efficient that it stole the market. Imitators sprang up immediately, but the brothers were still successful enough that by 1909, they had expanded into a five-story factory, took the business public and rebranded as the Sommers Bros. Match Co.

For lumber sourcing, the brothers wanted only the best, which led them to the great white pine forests of North Idaho. The grain of old growth white pines was so straight that it could be split into the tiniest shards with virtually no waste, making it the perfect medium for matches. The brothers acquired timberland near Sandpoint bountiful enough “to last them for the next 50 years” — an incredible amount, as the Saginaw factory was producing more than 86 million matches per day at its peak. Logs were cut and milled in Sandpoint and shipped to Saginaw to be dipped and packaged.

Between the felling of the trees and the finishing of the matches was a clever process that gave the Sommers brothers a crucial edge over Diamond for a brief period of time. In addition to the lumber mill they set up west of Sandpoint, they also acquired 40 acres north of the Humbird lumber yards on Sand Creek for a second facility. In 1909, this property became the “match block factory” under the supervision of a man named John H. Bolin.

Only 60% of raw white pine ultimately turned into salable matchsticks, the rest being waste on the factory floor. Frank, once again, came up with an ingenious solution. If they could pre-cut the logs into small match “blocks” the precise height of a matchstick, they could pack these blocks onto trains headed to the Saginaw factory and virtually dispense with any wasted space or weight, saving money on shipping.

Overnight, the Saginaw plant was able to boost production to levels that were competing with Diamond’s immense output. The Sandpoint block factory bustled along, becoming one of the largest employers in the town. Any blocks with knots or other imperfections were weeded out at the Sandpoint factory and sold to the Sandpoint Ice & Fuel Co. They resold them to individuals looking for conveniently sized pieces of wood for their stoves, which became an immensely popular product among locals.

Things went along without incident for a handful of years, until early 1917, when two employees aged about 20 years got in a serious fight over a grudge that ended with one slashing the skull of the other several times with a hand axe. The injured man (Bolin’s brother-in-law) received stitches and returned to work the next morning. The assailant did not return to work, and was never seen again.

In September 1917, factory manager Bolin asked the city to dam Sand Creek, so that the match block factory could expand with a reliable year-round millpond. The Sommers Bros. Company had recently acquired the Sand Creek frontage that had previously housed the LaFond brickyard. Bolin stressed that the factory was being enticed to move elsewhere (probably to Newport, rumors of which Bolin had been refuting for the previous seven years).

Such a move would have cost the community $160,000 (about $3.3 million today) in jobs and local contracts; and, as the city was deeply in debt at the time, town leaders were eager to cater to the match factory’s needs. A special task force of local businessmen was recruited to raise funds for the proposed dam and to set a timeline for construction. Newspapers are unclear about whether this particular effort ever came to fruition, though an article from 1930 mentions a concrete dam with a wooden spillway on Sand Creek that was in terrible disrepair. 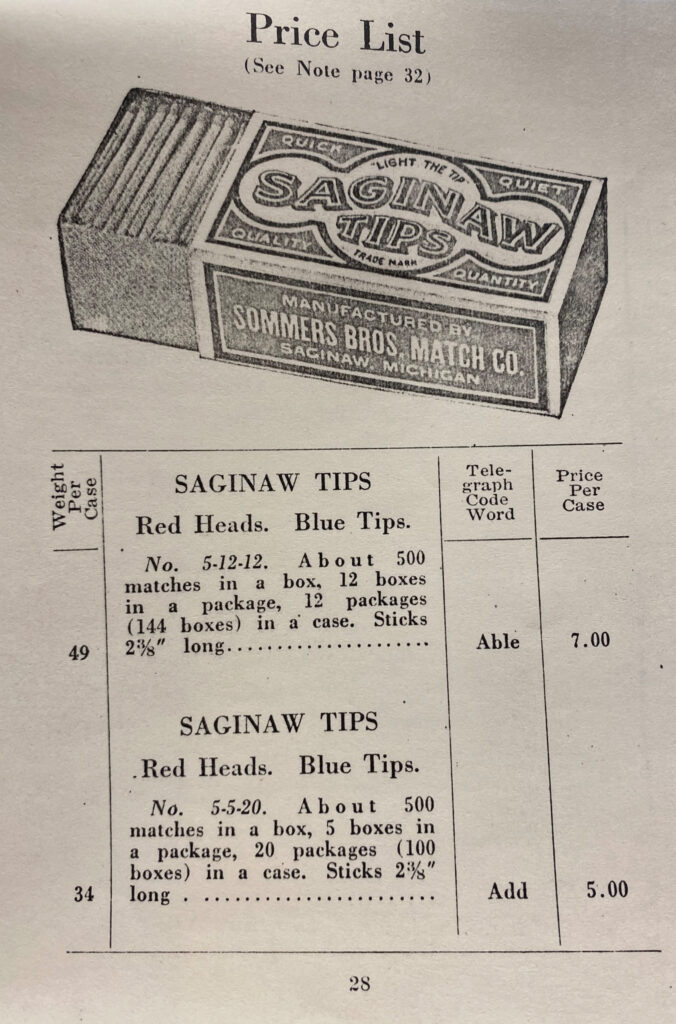 On March 29, 1921, disaster struck when the match block factory burned to the ground. All of the employees had gone home mid-afternoon, and the factory didn’t keep a night watchman. Around 9 p.m. a watchman at the Humbird mill set off an alarm, and great efforts were taken to prevent the fire from reaching the Humbird lumber yards. The match factory was surrendered as an insurance claim.

“The flames were allowed to roar on without opposition,” the newspaper reported, lighting up the night for a crowd of more than 1,000 people who had gathered to watch.

Bolin reassured employees that they would immediately rebuild; but, by August of that year, the Sommers brothers had given in to an acquisition offer from Diamond Match Co., and the local factory workers were out of work. However, prior to the fire, Bolin had been experimenting with improvements to his machinery, and that summer he patented an automatic block cutting machine that would greatly increase production capacity. He pledged to rebuild and reestablish the block factory himself if he could secure enough independent contracts.

Good to his word, Bolin rebuilt and reopened the factory in September, in a new location between Lake and Superior streets on the western edge of Sandpoint. Several years later, Bolin traveled back east to visit family and decided not to return. The newly reformed Sommers Bros. Co. purchased the new factory from Bolin and operated it for a brief period. The building burned down in 1928, four years after being abandoned.

Looking back on the era of trust-busting and the toppling of industry titans, it’s romantic to think of the little block factory outdoing a megalithic corporation. In reality, the fluidity and opportunity in the timber industry meant that companies scrambled over each other to make the most of whatever they could pull out of the woods. But for a short burst of time — a momentary flame — the Sommers brothers were a propitious match for a little town in North Idaho.

Research provided by the Bonner County History Museum and the University of Michigan.