Liquids are a vital part of our ability to survive. If water didn’t have a sustained liquid form on Earth, life wouldn’t have evolved to its current state. That also means coffee wouldn’t be a thing, and that’s a hellish existence too cruel to imagine. 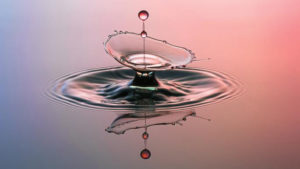 In theory, most anything can achieve a liquid state under the proper conditions. Think about a fruit smoothie. Has the fruit become a liquid, or is the liquid water just carrying tiny solid chunks of fruit? In most cases, this distinction is insignificant for us, but it’s important for scientists wielding cutting edge technology for the betterment of mankind.

Our reference point for what makes a liquid normal or abnormal is water. It flows freely, it leaves residue on everything it touches and, despite being one of the most destructive and powerful forces on the planet, is considered fairly tame when compared to something like sulfuric acid. Water is considered a Newtonian fluid, with normal viscosity, or an ability to move freely and flow — most important, an application of force doesn’t alter its behavior.

Fluids that behave strangely, generally because of a high viscosity, are called non-Newtonian fluids. Honey is an example of a non-Newtonian fluid, as it is very dense and flows extremely slowly. Bees make honey by consuming the pollen grains of flower, breaking them down with partial digestion and spitting up the sugary mixture, then fanning it with their wings to remove the moisture. Unlike water, honey is completely unique to our planet. After all, we haven’t found any Martian bees.

Another non-Newtonian fluid unique to Earth is Oobleck, a mixture of cornstarch and water to create a funky white substance akin to jelly. Oobleck has a unique viscosity, not as fluid as water, but not as dense as honey. This means it’s capable of easily taking the shape of most anything, including sound waves. By draping plastic wrap over a speaker and dropping some Oobleck over the plastic, you can make the substance “dance” by playing the speaker, particularly with bass. As the water evaporates from the goop, the sugars harden into something reminiscent of plaster.

Sometimes, strange liquid behavior requires specific parameters to be met. On Titan, the largest of Saturn’s 53 moons, there are huge lakes of liquid methane, the stuff that makes your farts smell. If swimming in stink tickles your fancy, you’ll want to bundle up, because methane shifts from a gas to a liquid at -296.4 degrees Fahrenheit. It also has about half the density of water, which means that if you did try to swim in it, it wouldn’t be dense enough for you to propel yourself through.

Luckily, on Titan, you only weigh about 12% of what you do on Earth, so it’s still possible for you to float, or even undulate like a dolphin to move. There is no substance on Earth that behaves like this, and the closest correlation I can imagine is like trying to swim through a ball pit at a carnival, but much stinkier.

The award for most unique liquid on this list goes to one we’ve never actually observed. Liquid metallic hydrogen is a substance theorized to be at the center of gas giants like Jupiter. Pictures of Jupiter are a disservice to just how insanely big this planet is. It takes 11.5 Earths, side-by-side, to match Jupiter’s diameter. It is 2.5 times the total mass of every other planet in the solar system combined. That’s an immense amount of hydrogen, which is believed to change into different phases of matter as you dive deeper toward the planetary core.

The gas in gas giants acts similarly to how water acts in the ocean. The more water you have above you, the greater the pressure becomes. All of this gas also acts as an insulator, trapping more heat the farther toward the center you get. At some point, the incredible pressure starts transforming the hydrogen into a liquid state. In a vacuum, this requires a temperature of -417 degrees F, but huge amounts of pressure make matter act in unusual ways; and, despite temperatures in the thousands of degrees, the hydrogen still morphs into a liquid. At some point, the liquid transforms into a metallic state before becoming a liquid metal, which is believed to comprise most of Jupiter’s core.

The awe-inspiring forces involved here are something we aren’t able to fully replicate on Earth, even in highly controlled laboratory environments. The closest proxy to metallic liquid hydrogen is the element Mercury, and that’s not even close.

It’s pretty wild to think that the craziest liquid, able to exert the most intense pressures known to man, is actually the lightest element in the universe.

One last fun liquid fact: Paper is treated with high amounts of pressure to strengthen the cellulose fibers. When water touches it, the hydrogen in the water weakens those bonds and damages the structural integrity of the paper, which leads to a damaged, crinkly appearance once it’s dried, which will require less force to break it apart. Test it on this page when you’re done reading and see.