Mad About Science: The weirdness of science

Just when you think you’ve got it all figured out, science goes and throws some wild curveballs at you (that usually put you into a walk for first!).

Unlike 90 percent of what I dither on about from week to week, the following experiments can happen from the comfort of your own home. 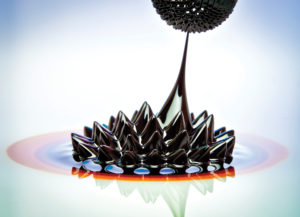 Because, let’s face it, you have no way to experiment on a T-Rex, so a hot plate and a glass of water are going to have to suffice.

In the realm of weird, this is one you probably see on a daily basis without even realizing how freaking weird it is.

The Leidenfrost Effect. What sounds like a bad thriller movie starring Kevin Bacon running from World War II ice zombies is actually a very common occurrence in the kitchen.

When a liquid hits a surface above its boiling point (but not so high that it vaporizes the liquid instantly), the bottom of the liquid will become a gas and cushion the rest of the liquid on top, making it levitate and skitter around.

Liquid Nitrogen does this when spilled on most surfaces.

Want to see it in action? Next time you’re about to fry up something on your stovetop, get your pan nice and hot and dribble a little bit of water onto the surface. The droplets will be skittering around, levitating on cushions of steam!

Non-Newtonian fluids are another fun experiment. The umbrella of what is a non-Newtonian fluid is pretty broad, ranging from laundry soaps to your own blood, to the famous oobleck. A non-Newtonian fluid is a fluid that doesn’t quite behave like a fluid should. It’s actually far more complicated than this, but I’m on a word crunch here. The internet is stuffed full of fun facts about NNFs, so if you’re curious about the whys, the answers are a short search away.

If you want to see an example in real life, mix some water and cornstarch together to create oobleck. Oobleck is really dense and sensitive to vibration and movement. If you put some plastic wrap over the entire face of a speaker, point it right up at the ceiling and blast some bass, your Oobleck will dance to the thumping sound waves. You can also put it in a bowl and shake it — that looks pretty cool, too.

This stuff is a mess, fair warning.

Ferrofluid is another weird liquid that shouldn’t be. Under normal circumstances, it just looks like tar or oil. Put a magnet near it, and it will suddenly spike up and move with the magnet. This stuff is supremely weird, but has lots of really cool applications. One of my favorites is as a sealant for computer hard drives.

Making this stuff at home can be a little tricky (and messy), but a practice once strictly performed in multi-million dollar laboratories can now be done with cooking oil, old cassettes and internet access!

The easiest, but most expensive way to make your own ferrofluid is to mix magnetic ink (anywhere from $30 to $100 online) with cooking oil, and voila! Magnetic oil!

Another way is to use magnets to strip the magnetic particles from old cassette tapes, and mix that with cooking oil.

Just make sure they aren’t part of your dad’s secret collection. No one wants to see Toto end up in a pile of magnetic goop.

You’ve probably seen Elephant’s Toothpaste on every kids’ science show (and “The Walking Dead”), but that doesn’t stop it from being surprising fun. Don’t do this unsupervised.

You’ll need a few things: a clean (and empty) soda bottle, half a cup of hydrogen peroxide, a tablespoon of dry yeast and another tablespoon of dishwashing soap. If you want it to be colorful, use a few drops of food dye. Be sure to wear goggles and gloves, and be ready to clean up a mess afterward.

I won’t spoil the rest for you, but I’ll tell you why it did what it did.

The yeast acts as a catalyst that causes the hydrogen peroxide (H2O2) to decay into oxygen (O) and water (H2O) very rapidly. The soapy water traps the oxygen that’s pushing its way out of the container, thus resulting in the giant mess you’re now cleaning up.

Do you have any fun science experiments you’d like to share? Let me know at the library! Or let the Reader know; I’m sure Ben wouldn’t mind a break from the heavier stuff.

Just be sure you’re safe about it. Always wear protective goggles and gloves- They’re like $5 together at the store, so you have no excuse not to!