A Tale of Three Goslings

Two months ago our neighbor brought over three tiny Canadian geese goslings that had wandered out of the woods and onto her field. Unfortunately, there were no adults in sight, and because we have a small pond, she wondered if we could take them. So along they came to join our other oddball assortment of feathered and furry companions. 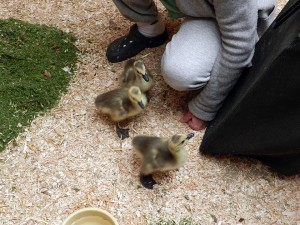 The goslings totter around with their temporary adopted parent. Photo by Kestrel Bass.

About seven years ago, a wild mallard decided that being wild wasn’t all it was cracked up to be and followed our ragtag gang into the chicken coop one evening. He has never wanted to leave, and the gate has always been open. Larry, our Toulouse goose, immediately became the nanny extraordinaire of our new little group, not allowing another creature anywhere near them including myself.  Unfortunately (or fortunately), the little fellows imprinted on me. Whenever they caught a glimpse of me, they would stand up like little soldiers on their oversized webbed feet and run full-bore over to me, tiny wings flapping with delight. This displeased Larry greatly, and his dislike for me has since reached epic proportions.

Larry has taken to my husband but has always had a comical distain for me. He has never really appreciated that I am the one keeping him alive and safe. There has never been an attempt of any sort of affection towards me on his part. Needless to say, I have to be on constant alert and keep well out of his reach. As old as he is, he can still run or swim extremely quickly if he thinks he can get in a good bite.

We kept the little goslings for a few weeks until I found out that it was illegal to keep them. Oops! It was also becoming apparent that they needed more instruction on becoming full-fledged Canadian geese than I could give them.

Each spring a few pair would come to our pond, splash about and leave. Rarely would they bring their offspring as walking through the woods never really worked out well for the goslings. But no adult geese came to the pond while we had them in our care.

As I read up on them a bit more, I found that they really did need other geese to learn from and connect with so that they could live happily and independently in the wild, so now what to do? 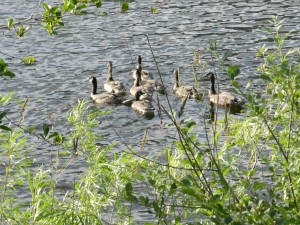 Our vet told me about the American Heritage Wild Life Foundation in Clark Fork and I called them right away. What a stroke of luck! Founder and wildlife specialist Kathleen St. Clair-McGee and Sara Lendzioszek—a wildlife intern in her final year at Montana State earning her degree in conservation biology and ecology—met me and escorted us to the nursery. Luckily, they had room to take in our little group and, in fact, had themselves gotten four goslings about the same age sometime before our arrival.

They weighed and inspected the goslings for any diseases and then gently put them into a crate until they could acclimate and then join the others. Looking around, I saw a gaze of baby raccoons and a young raven that had fallen out of its nest during a wind storm. We kept our voices at a whisper, and I was not allowed to interact in any way with the animals in their care. For their own good they were well-tended, but human interaction was kept at a minimum. This helps return them to the wild with the least hesitation, assimilating them quickly and easily back into their natural habitats.

I asked if I could attend their release date and both women were more than happy to have me be there.

Last week, I got to see them again for the first time in about six weeks. They had grown into young, majestic birds now, strong and healthy and ready to be independent. Our little caravan of cars drove them to a quiet part of the Clark Fork River where they were let go.  It was hoped that they would join up with fellow geese already in the area but it seemed they were a happy little family on their own swimming and splashing in their new environment. We all watched with such joy while taking lots of pictures.

The American Heritage Wildlife Foundation is a blessing to our community. It is a fully voluntary organization whose purpose is to tend to the many orphaned and hurt animals in our area and to teach and inspire the rest of us to live alongside the wonderful creatures of the forest and waterways. They can always use the help and donations are happily accepted.

Should an injured or very young, abandoned or lost wild animal cross your path please don’t hesitate to call or email them.