Kochava ceremony brings in a crowd

There’s no clearer sign of a booming business than the need for a bigger workplace. 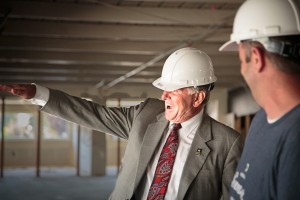 Kochava employees and administrators demonstrated that fact Monday by attracting Idaho politicians and international business leaders to Sandpoint for a ribbon-cutting at its new headquarters. Gov. C.L.  ”Butch” Otter joined Rep. Sage Dixon, R-Ponderay, Sen. Shawn Keough, R-Sandpoint and Mayor Shelby Rognstad to celebrate the occasion. Representatives of  Amazon, AOL, Disney, Google, Hilton, Priceline, and Turner Broadcast, all companies that use Kochava for analytics services on their mobile advertising, also turned out for the occasion.

“The new Kochava headquarters represents Kochava’s commitment to the revitalization of downtown Sandpoint,” Rognstad said at the ceremony.

According to Otter, he’s been watching the company’s growth with interest. He said it’s given him bragging rights when he meets with other governors at annual conferences, and it’s contributed to Sandpoint’s growing reputation across the country.

“When a company like Kochava decides to plant its roots here in Sandpoint, other companies will follow,” he said.

Kochava executives, including CEO Charles Manning, met with Otter and his staff for lunch prior to the ceremony. The meal was an opportunity to discuss the business, as well as various initiatives the state is working to introduce.

“It was a real pleasure to host the governor,” Manning said. “It demonstrates the importance of our region in Idaho and the impact we’re making with our growth.”

The ceremony was also an opportunity to showcase Kochava’s future for some its biggest clients. Kochava rolled out the red carpet to introduce them to Sandpoint’s charms.

“The select clients that were in town during the event were thrilled to be part of the ribbon-cutting,” Manning said. “They are the reason we exist, and we were excited to have them join us.”

The new headquarters will provide the growing company space to stretch its legs. Manning anticipates that Kochava will employ 100 people by the end of year, with an additional 20 positions not far behind.

There’s still much work to be done before Kochava completes its move from its existing location in the Columbia Bank building. Company executives plan to complete the move to the building’s second floor, which was given priority as phase one of the project, around the end of August. Phase two, encompassing the lower floor, will begin later this year.

“Having a personal space for the business will be a great upside to the new building,” Manning said.  “While Columbia has been a great partner over the last  year, we found that if we wanted to grow, our team was going to be disjointed throughout the building.  Our new office offers us the ability to be together with a designed environment that fits our culture.”

It was no easy task to turn the  201 Church St. building into a proper home for a growing tech company. Thanks to dozens of local contract workers, however, the new headquarters is nearly ready for service.

According to Jeremy Grimm, Kochava director of publisher development, Sayler/Owens/Kerr designed the renovation, Jerry Cox at Winterhawk Construction was the general contractor, Tork Electric handled electrical engineering and wiring, Wills Plumbing installed plumbing, Nick Rust at Clean Lines Tile did the tile, In and Out Painting threw a new coat on the exterior, Lou’s Welding provided metal fabrication, Selkirk Glass and Cabinets decked out the interior with glass and doors and James A. Sewell and Associates provided structural engineering. Later, Intermax will run a line of fiber to the building that should cover Kochava’s bandwidth-intensive needs.