The U.S. Postal Service issued a new, “forever” stamp featuring the portrait of nuclear physicist Chien-Shiung Wu. She is not known to the general public, but is famous to physics students because of her groundbreaking experiment on the beta decay of radioactive nuclei. When I was a grad student, we referred to her respectfully as “Madame Wu,” with perhaps a tinge of mystery and intrigue involved. 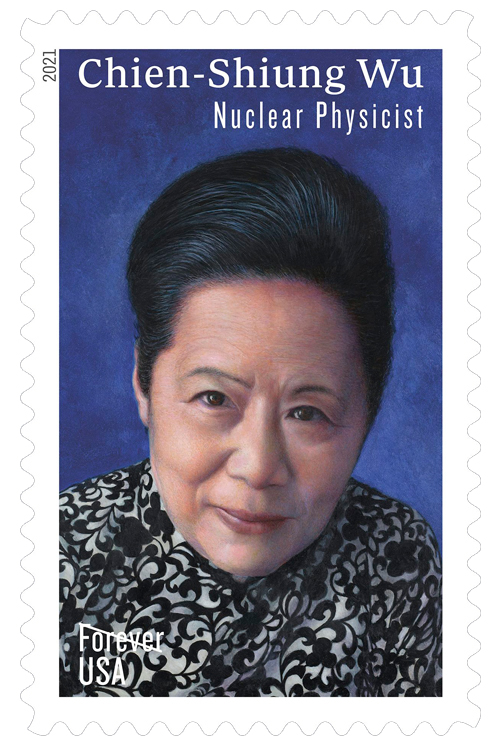 The USPS has honored Chien-Shiung Wu with a postage stamp in 2021. Courtesy photo.

Chien-Shiung Wu was born in a village near Shanghai. She was a very bright student and, at 17, entered the National Central University in Nanjing. She studied mathematics, but later switched to physics. After graduation, she performed research at the Chinese Institute of Physics of the Academia Sinica. Her supervisor, who obtained a Ph.D. from the University of Michigan, encouraged Wu to pursue her Ph.D. from the same university. Wu applied and was accepted. She and a girlfriend then sailed to San Francisco. When they arrived, they visited the University of California at Berkeley. Wu also visited the famous Lawrence Radiation Laboratory, named after Ernest Lawrence who invented the first cyclotron. The physicist, Luke Yuan, who escorted her would become her future husband. However, while in California, she heard that the University of Michigan did not allow women to use the front entrance of its buildings. She immediately changed her plans and enrolled at U.C. Berkeley.

At the lab, Wu studied beta decay and became an authority on the subject. After completing her Ph.D. in 1940, she stayed on to perform post-doctoral research. In 1942, she and Yuan got married and they moved to the East Coast to accept jobs. Wu taught at Smith College, later accepting a research position at Princeton. In 1944, Wu joined the top-secret Manhattan Project, which was assigned to build the atomic bomb. It is believed that she was the only individual of Asian descent to work on the project.

Wu became a research professor at Columbia University after World War II, where she remained until retirement. Her parents stayed in China and wrote to her not to return home. So in 1954, she became a U.S. citizen. In 1956, Wu carried out the famous “Wu Experiment,” which would make a valuable contribution to nuclear and particle physics. Her experiment examined beta decay, during which a radioactive nucleus splits or decays into a new nucleus, plus an electron (the beta ray) and a neutrino-type particle. For our purposes, we only need to focus on the electron.

As nuclear and particle physics evolved, numerous conservation laws were discovered. These laws are considered to be “sacred cows,” and if an experiment ever showed that one of these laws crashed and burned when hitting the ground of reality, it would ruin your day.

One of these laws was known as “Conservation of Parity.” Parity, from Latin (paritas), translates to “equal status.” For simplicity, imagine a single nucleus as a microscopic, spinning ball. By turning on a magnetic field, the nucleus will align its North Pole-South Pole axis along the field line. Parity says that there is an equal chance that an electron may be emitted up from the North Pole or down from the South Pole of the nucleus.

However, in Wu’s experiment, a sample will contain a large number of identical, radioactive nuclei. Very low temperatures are required to prevent nuclei from thermally knocking each other about, and ruining their spin alignments. For this large number of nuclei, parity predicts there should be equal numbers of electrons emitted upward and downward. Madame Wu tested this claim experimentally.

Meanwhile, also in the 1950s, there were two bright young Chinese-American theoretical physicists, named T.D. Lee and C.N. Yang, who were making names for themselves. They, too, were interested in the theory of parity conservation. In 1956, after much theoretical work, Lee and Yang predicted that parity might not be conserved. They searched, but could not find any experimental data for or against parity conservation. Knowing Wu’s work as an expert in beta decay, they contacted her and began working on ideas for an experiment. Realizing that she could be involved with a breakthrough experiment, she immediately started work in May 1956.

Her experiment was designed to measure electrons emitted from the beta decay of radioactive Cobalt-60. It needed a strong, magnetic field to line up all the nuclei spinning in the same way. This is like having a large group of ice skaters individually spinning in the same way, but each holding their own spot on the ice. She also needed low temperatures. Wu contacted physicist Ernest Ambler of the National Bureau of Standards in Washington, D.C, which housed a low-temperature lab. In December 1956, Wu and Ambler experimentally and shockingly discovered that electrons were overwhelmingly coming from the South Poles. This asymmetry was the first evidence that the law of parity was violated. Although upsetting the physics community, other experimentalists soon confirmed Wu’s results.

In 1957, the Nobel Prize was awarded to Lee and Yang for their theoretical work. Wu was mentioned in their acceptance speech, but not included in the prize.

Regardless, throughout her career, Madame Wu was honored for her achievements. She was elected a member to prestigious science organizations. She received numerous other awards, prizes and medals. She was the first woman to serve as president of the American Physical Society, the first woman to receive the Comstock Prize from the National Academy of Sciences and the first woman to receive a Research Corporation Award. She was awarded honorary degrees from many universities, including Harvard, Yale and Princeton. In 1978, she was the first person to be awarded the new Wolf Prize at its first offering. This prize considers candidates who are of Nobel caliber. But still, why not the Nobel? Some of the most eminent physicists of the day did champion Wu’s case. Starting in 1958, she was nominated at least seven times, until her death in 1997. A year later, she was posthumously inducted into the National Women’s Hall of Fame.

I thank the U.S. Postal Service for honoring this unique scientist by issuing her “forever” stamp in 2021. Now, the general public can see her portrait with the caption, “Chien-Shiung Wu, Nuclear Physicist,” and wonder: Who is she? Hopefully they are curious enough to find out.

Phil Deutchman is an emeritus professor of physics and a Sandpoint resident.