Trout and About Festival swims into town

One evening in Missoula, Reg Crawford of Trout Unlimited walked into the Top Hat Bar which had begun showcasing children’s bands. She thought they were a blast, so she couldn’t understand why no one was hanging out.

“They’re really trying to reach this demographic of young parents in a way that mixes learning and the energy of a music festival to make education more fun,” she said.

It was then the lightbulb flicked on for Trout and About, a hybrid event combining the fun and energy of a music festival with important lessons on fisheries and water quality in Idaho. Intended for kids and adults who are kids at heart, this event will have many fun trout-related raffles, giveaways, education and activities including glitter tattoos, coloring, a mini-hooping clinic, cornhole and fly casting lessons, to name a few. 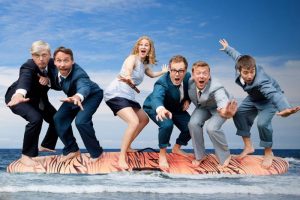 Acclaimed band The Whizpops will be playing the Trout and About Festival next week. Courtesy photo.

Kicking off the festival this year will be Missoula-based band The Whizpop, who will be playing “The Bull Trout Song.” This tune was made specifically for the Panhandle Trout Unlimited and Idaho Fish and Game to support the “Take No Bull – Protect Bull Trout” program.

The Whizpops are known for their multi-genre, science-based, educational songs that entertain, teach and groove all ages. According to the event website, The Whizpops worked with the National Wildlife Federation in May 2016 to put together a new album “Ranger Rick’s Trail Mix Vol. 1.” The song “The Stream I Call Home: The Bull Trout Song” is included on the album.

This year’s festival will also showcase a second act, the Kitchen Dwellers. This Bozeman-based band has been blowing up on the festival circuit, playing alongside the likes of Railroad Earth, Greensky Bluegrass, The Infamous Stringdusters and Twiddle. Their high-energy performances have been dazzling bluegrass fans across the country.

Despite the heavy-hitting musical line up, we can’t forget that the star of the show is the bull trout.

You may have seen the bull trout signs at Sandpoint City Beach and for good reason, as they most certainly are endangered. Once flourishing in many states, they now are non-existent in California, and most of the remaining population is within their stronghold here in Idaho and Montana.

A bull trout, or char, which can be identified by the black markings along the caudal (tail) fin. Photo used by permission.

The Take No Bull organization’s initial slogan “no black, put it back” was relabeled to avoid any confusion, beginning two years ago with “take no bull” and most recently with “no black on the fin, put it back in.” In order to protect the Bull Trout, their aquatic environment must adhere to the 4 C’s: Clear, Cold, Complex and Connected. The last of these four is extremely important, because if bull trout cannot connect upstream, reproduction becomes impossible.

Another top priority is to educate youth on the dangers of invasive aquatic species, most notably mollusks and flowering rush.

Flowering Rush in essence wants to become part of the sediment, which accumulates at its roots. These invasive species, if not cleaned properly from the underside of boats can make their way from other bodies of water to Lake Pend Oreille. There will also be a macro-invertebrates (insects) booth that illustrates their importance to our area and what they can tell us about a healthy water system.

Unfortunately, the timing of last year’s Trout and About was plagued by rainy weather which surprisingly also overlapped with a dangerous and stressful fire season.

“We’re not going to talk about last year—this year is going to be bigger and better then ever,” said Crawford, who is the bull trout protection and public education project leader with the Panhandle chapter of Trout Unlimited.

This year, the event is sponsored by Avista, Panhandle Chapter Trout Unlimited, Idaho Fish and Game, and Montana Fish, Wildlife and Park. The organization has also received support from the likes of Evans Brothers Coffee, Eichardt’s Pub, Eureka Center, AFS and through their partnership with the Clark Fork Settlement agreement.

The Whizpops begin at 12 p.m. and the Kitchen Dwellers at 3 p.m. Tickets are only $3 for adults, and kids get in free.

This is an outdoor event, so please remember to bring a camp chair. Chairs will also be available for rent at a $1 suggested donation.

A raffle drawing will be held at approximately 2:30 p.m. for local gift certificates and a YETI Hopper valued at $400. Food and beverages will be provided by Eichardt’s Pub, Jupiter Jane Café and Evans Brothers Coffee.